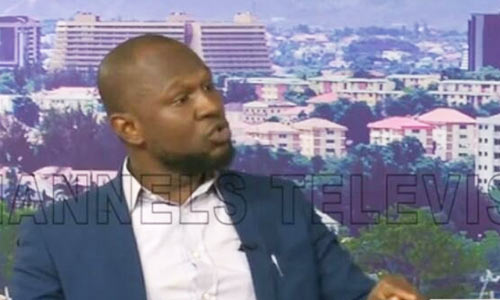 Abuja based Lawyer, Obioma Ezenwobodo has condemned the call by the Attorney General of the Federation (AGF) urging the Inspector General of Police (IGP) to intervene in the crisis ravaging Edo State House of Assembly as abuse of power.

This is contained in a statement issued by the Lawyer which was made available to TheNigeriaLawyer, entitled “The Letter by AGF, Abubarkar Malami On Edo State House of Assembly Issue Amounts To Abuse Of Power”.

“The letter written by the Attorney General of the Federation, Abubarkar Malami (SAN) directing the IGP to intervene in Edo House of Assembly issue is a manifest disregard to the authority of our courts and an assault to democratic ethos.” He said.

Meanwhile, he stated that Edo State is an independent component of the federation with its AG.

In addition, he noted that it is the duty of the Courts to resolve disputes and not by the dint of AGF’s directions.

“Where any arm of government in Edo State is having an issue, the court is there to resolve that issue. It then becomes tragic for the AGF to constitute himself to a Court of Law giving direction to the IGP on an issue that borders on Edo State and not the Federation.

“The most disturbing trend in the Edo State issue is that it is already a subject of litigation and one expects any reasonable person to advise the contending parties to submit themselves to the jurisdiction of the court.” He said.

Furthermore, he disclosed that the Court has already made a pronouncement on the issue as it affects the proclamation of Gov. Obaseki of Edo State.

“For the avoidance of doubt, the Federal High Court sitting in Port Harcourt, Rivers State Thursday, upheld the proclamation of the seventh Edo State House of Assembly made by Governor Godwin Obaseki in a Suit No. FHC/PH/CS/159/2019: Hon Yekini Idiaye & Anor V. Clerk of The NASS & 5 Ors:

“In the final judgment delivered by Justice J.K. Omotosho, the court ruled that a governor does not have the powers to issue a second proclamation after a first proclamation has been made.” He said.

Furthermore, he noted that the Judge had made a pronouncement on the validity.

“According to Justice Omotosho, the governor of a state does not take directive from National Assembly, adding that the proclamation issued by Governor Obaseki is valid; to do otherwise is null and void. The learned Justice Omotosho made following pronouncements to assert the decision of the court:

(a) That the word proclamation has been defined by Black’s law Dictionary. That from the definition, Proclamation must be in writing and published by printing out and duly signed under the hand of an identified person issuing same. That as far as law is concerned, the 6th Defendant has duly issued the required proclamation as provided for under the Constitution of Federal Republic of Nigeria 1999.

(b) That NASS cannot under the Constitution of Federal Republic of Nigeria 1999 issue directive to a Governor of a state in the performance of his constitutional duties.

(c) That the Supreme Court’s decision in Balonwu’s case with respect to Anambra State Gov’s proclamation under Ngige is to the effect that proclamation can only be issued once as done by the 6th Defendant in this Edo State case.

(d) That the directive of NASS to the 6th Defendant has the effect of creating a constitutional crisis by elongating the life of Edo State House of Assembly beyond the constitutionally recognized 4 years, the house haven been duly inaugurated on 17/6/19.

(e) That the proclamation issued by the 6th Defendant on 14/6/19 for the inauguration of ESHA on 17/6/19 is valid and subsisting in law and the directive of National Assembly to the 6th Defendant to issue another proclamation is unconstitutional, null and void, just as the directive for the premises of the Edo State House of Assembly to be sealed off.

(f) That State Governments under the Nigerian Constitution are autonomous and not an appendage of the National Assembly.” He said.

Furthermore, he stated that the Court had resolved that the National Assembly is divested of any power to act as if Edo State House of Assembly is its appendage.

“His Lordship equally noted that the National Assembly lacks the jurisdiction to take over the Edo State House of Assembly, as doing so will amount to infringing on its right to function and that Edo State House of Assembly is not an appendage of the National Assembly. The learned Justice in further addressing the prayers of the claimants made the following pronouncements:

(b) That the intention of the drafters of Section 11(4&5) of the Constitution of the Federal Republic of Nigeria 1999 is not for the National Assembly to adjudge on its own when the condition precedent laid down by the sections for the exercise of the power under Subsection 11(4) has happened and attempt to take over the legislative functions of the ESHA on every flimsy excuse.

(c) That NASS cannot unilaterally declare that a State House of Assembly is unable to perform its legislative functions, it is the duty of the court to make such determination upon the issue if and when properly submitted to it for determination. It is after such determination by the Court that the National Assembly can exercise its powers under Section 11(4). It is not the duty of NASS to interpret the Constitution, that is the exclusive preserve of the courts.

(d) That the NASS directive to seal off the ESHA is ultra vires the NASS as it is like the President Ordering the sealing off of a state Governor’s office.”

Besides, he noted that being a subsisting court judgement, the AGF is expected to be aware.

“This is a subsisting judgment of a court of competent jurisdiction which the AGF, the Chief Law Officer of the Federation should be aware of.” He said.

In addition, he stated that there are other pending matters and what is expected is to advise the parties to respect the Court by not doing an act against a pending suit.

“Currently, there are other pending legal matters on the Edo State House of Assembly issue and until they are resolved or definite pronouncements made on them, the parties involved should not be advised or encouraged, under any cover, to take the laws into their hands as doing so would render the decisions of the courts nugatory.”

Furthermore, he added as follows:

“It is also worrisome that the AGF, in cohort with other elements, would contrive the holding of the purported session by the 14/members elects at a location different from the State Legislative Chambers. This is against a judicial precedent set out in the case of Inakoju v. Adeleke (2007) 4 NWLR (Pt. 1025) 423 where the Supreme Court deprecated the holding of meeting by some members of Oyo State House of Assembly at D’Rovans Hotel, Ring Road, to remove the 3rd respondent, Senator Rasheed Radoja (then Governor of Oyo State) from office. The Supreme Court per Niki Tobi held thus:

“the intention of the Constitution is to make the House of Assembly sit physically in the building provided for that purpose. If I am wrong and the appellants are right, it will then mean that the Governor has to move to a hotel to address the members anytime the House sits there and he wants to take advantage of section 108. Can that be the intention of the makers of the Constitution? Will that not be ridiculous?”

“His Lordship also quoted the case of Akintola v Aderemi (1962) All NLR 440 at 443, where it was held that anything done outside the House of Assembly to remove the Governor of the old Western Region was/is a nullity.” He said.

Finally, he stated that in the light of his elucidation, it is enjoined that the AGF would tow the line of due process.

“With these avalanche of legal authorities, one wonders why the AGF would be towing the path of lawlessness and flagrant abuse of judicial process.

“Clearly, the issue in Edo State has nothing to do with the AGF as Edo State is not a subordinate of the Federal Government which appointed the AGF.

“The issue of proclamation by the Governor has already been pronounced upon by a Court of competent jurisdiction and any aggrieved party must have appealed or should appeal on it. The direction by the AGF to the IGP is not just a brazen abuse of power but an utter discretion of judicial process. The AGF should be circumspect in his actions.” He concluded.