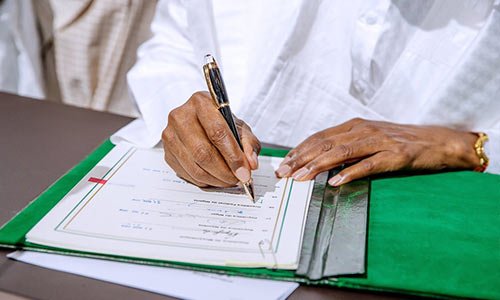 When the African Continental Free Trade Area agreement comes into full force, imported goods to Nigeria may jump by 251 per cent within 15 years.

This, according to a research conducted by the Centre for Trade and Development Initiatives, University of Ibadan, is for goods currently attracting 20 per cent import duty.

Findings of the study showed that Nigeria had the least import penetration in Africa from African countries.

“This obviously makes the country an export target for many African countries in the AfCFTA. Nigeria is trailed by South Africa, Tanzania, Cameroun and Egypt in the same level recording about 30 per cent import penetration,” it stated.

The study commissioned by the Manufacturers Association of Nigeria sought to investigate the potential impact of the trade pact on the manufacturing sector, as well as its offensive and defensive imperatives.

It also stated, “Import will surge in all the manufacturing sectoral groups and by extension the77 subsectors in the third phase of the liberalisation. Particularly, tariff cuts would trigger increases in import for food, beverages and tobacco, 91 per cent; chemical and pharmaceutical products, 180.7 per cent; plastic and rubber products, 111.6 per cent; wood and wood products, 96.2 per cent; textile, apparel and footwear, 55.2 per cent; non-metallic, 67.2 per cent; electrical and electronics, 218.2 per cent; and motor vehicles and Assembly, 2000 per cent.”

The study concluded that in view of the high cost of manufacturing operating environment prevalent in Nigeria (well above the continental average), AfCFTA would have overwhelming negative impact on the manufacturing sector, even though in differing magnitude.

It stated that liberalisation would spell doom for all the sectors; output would decline in all sectors but with higher magnitude in motor vehicle and miscellaneous assembly, chemical and pharmaceutical and electrical and electronic industries compared to others.

It stated, “The change in domestic outputs of manufacturing sector is negative and ranges from -10.00 per cent to -0.228 per cent; thus indicating that operators in the sector may close shop.

“Investment and employment in all industries will fall in the third phase (2029-2033) implementation of AfCFTA.”

According to the study, the leading supplier of African goods to Nigerian market is South Africa, accounting for 34.7 per cent of Nigeria’s import from African countries in 2017.

It said five out of 15 leading African supplying markets such as South Africa, Morocco, Côte d’Ivoire, Swaziland and Egypt accounted for 79.3 per cent of Nigeria’s import from Africa in 2017.

“It is important to recognise the adjustment costs that will arise during AfCFTA implementation and design appropriate framework to mitigate them,” MAN stated in a factsheet which was made available to our correspondent on Wednesday.

The association had initially cautioned against signing of the pact.

It said it advised against the signing because of some observed ‘significant gaps’ in the processes leading to singing.

“Remarkably, MAN is not against AfCFTA; the leadership of the association believes that Nigeria, being one of the largest economies in Africa, has the clout to dominate trade in an African Continental Free Trade Area. However, the association was faced with the following concerns: the 90:10 per cent market access ratio to be achieved within five years (for Nigeria) was not properly consulted; no articulation of the National Negotiation Mandate; absence of definite safety nets, specific trade remedies and well thought out dispute resolution mechanisms and absence of annexure for tariff on trade-in-goods.

It, however, commended the government for taking some bold actions on some of the identified items since March 21, 2018 when the AfCFTA framework agreement was first signed by some countries in Kigali Rwanda.