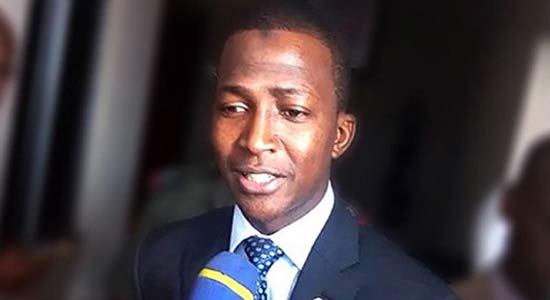 A prominent prosecuting counsel for the Economic and Financial Crimes Commission EFCC Barr Rotimi Oyedepo Iseoluwa has written why the name Abdulrasheed Bawa sprang up prominently on the 16th of February, 2021 when President Muhammadu Buhari nominated him as the Executive Chairman of the EFCC. Shortly after the announcement, all hell was let loose as various social media platforms started witnessing a harvest of untrue, libellous and malicious publications all in a desperate bid to paint the nominee as an unfit and unqualified candidate in the eyes of the public and the National Assembly saddled with the Constitutional and statutory responsibility of confirming his appointment.

In law there is what is called an eye witness’ account. This specie of evidence often enjoys more probative value because it seeks to establish with precision, the existence or non-existence of a particular fact in issue. In this case, I believe I can offer an insight about the man Abdulrasheed Bawa because I have had a unique privilege of working closely with him.

“I know him to be one of the best (if not the best) hands in the Commission. He has distinguished himself and is known for performing his statutory functions within the three cardinal pillars of the Commission’s core values to wit: integrity, professionalism and courage”

Fifth columnists, in their failed attempts to paint Mr. Abdulrasheed Bawa as corrupt, alleged that he was arrested, detained and investigated for oil theft and fraudulent sales of some trucks in Port-Harcourt office.

I was glad when the Commission promptly straightened the record by informing members of the public about the falsity of these allegations. From the much I know of Mr. Abdulrasheed Bawa, at no point in his carrier was he ever arrested, detained and or investigated for any crime, let alone the fraudulent sale of recovered proceeds of crime which he investigated and prosecuted to a just conclusion. Truth be told, the Man Bawa is a man of integrity.

I can also attest to the fact that Mr. Abdulrasheed Bawa demonstrated his addiction to professionalism and courage in all the formations of the Commission wherein he has served. He was posted to Ibadan Zonal office of the Commission as the Head of the Zone. In Ibadan, the nominee made serious indelible professional and courageous marks in the Zone. With his effort, the conviction rate of Ibadan Zone increased exponentially.

Having demonstrated his capacity to turn situations around, the management of the Commission posted him to the second largest operational hub of the Commission- Port Harcourt Zonal Office. Whilst in that Zone, he did not only increase the conviction rate, he was also able to recover proceeds of unlawful activities for economic benefit of government and various victims.

His leadership skills, professionalism and integrity also earned him his last posting to the largest operational hub of the Commission – Lagos Zonal Office. For those who know this Zone, the only conclusion they will come to is that Lagos Zonal office is now a pacesetter and by far, the most organized Zone in the Commission. To mention but a few, his achievements in the Lagos Zonal Office includes; renovation of the entire premises, re-organisation of the hitherto disorganised recovered proceeds of crimes/exhibits, electronic movements register, migration from paper to digitalised means of official communication and information sharing, accurate data base and statistics, massive recovery of proceeds of crime and convictions.

Oyedepo also noted that apart from his competence and capacity to lead the Commission, I am highly convinced that in view of the facts at hand and the provisions of section 1(2) of the Economic and Financial Crimes Commission (Establishment) Act 2004, Mr. Abdulrasheed Bawa is statutorily qualified to be appointed as the EFCC chairman.

The lawyer therefore appeal to the naysayers and those ganging up to stop this moving train, to desist, as there is no need for their rage. They should also note and know that there is nothing more powerful than an idea whose time has come.