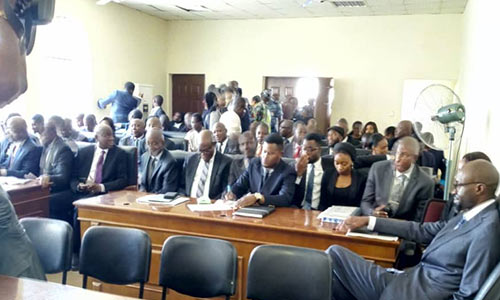 The Independent National Electoral Commission (INEC) has closed its case before the Osun state election petition tribunal, sitting at Osogbo.

INEC, alongside the declared winner of the election, Gov. Adeleke, and the PDP were sued before the tribunal as first, second and third respondents respectively by the immediate past Gov. Oyetola; who is contesting the results of the election as declared by INEC over sundry reasons.

At the last hearing before the tribunal on December 22, INEC had called its sole witness – Mrs. Abimbola Oladunjoye [Deputy Director (ICT), INEC], to the stands following a series of examinations and reexamination by counsel on all sides.

Counsel to the commission, Prof Ananaba, SAN, had also applied to the tribunal after the physical examination of the BVAS machines to have the said machines returned to INEC, with a promise to make the machine available when needed. A request was rejected by the tribunal, directing rather than the 976 BVAS machines be kept at the vault of the Central Bank of Nigeria, Osogbo.

INEC had also tendered six (6) schedules and four (4) documents in support of its case, of which the latter include: the CTC of the Bimodal Voters Accreditation (BVAS) Report; the receipt issued as payment for the said CTC of the BVAS Report; the Compliance Certificate issued concerning the said Report in compliance with Section 84 (4) of the Evidence Act; and, Remita receipt. All of these were admitted without objections, save from the petitioner who indicated an interest in deferring his objection(s) to be included as part of his final written address.

According to RW1, overvoting cannot be established through her witness statement on oath and BVAS Report (Exhibit RBVR:1-129), hence any comparison over questions of overvoting should take place should
be between Form EC8A and the physical BVAS machine because accordingly to the guideline, the voter accreditation figure is taken from the physical BVAS machine and the information on the EC8A.

Subsequently, Learned Counsel to the 2nd Respondent, Dr. Ikpeazu, SAN formally applied to tender some documents from the bar, which were already in schedules before the Tribunal: the Form EC8As and Bs concerning the 10 local governments in dispute.