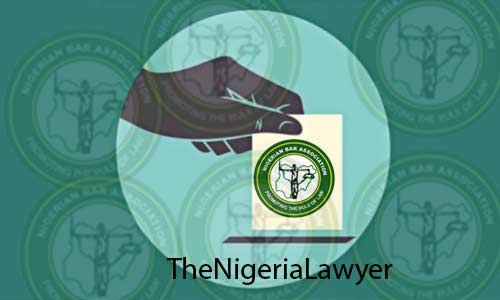 Mr. Tawo E Tawo, SAN, the Chairman of the Electoral Committee of the Nigerian Bar Association(ECNBA) has in an issued ECNBA Statement No. 006 explained that the Committee would not disenfranchise any Lawyer from voting in the forthcoming NBA National Elections.

However, the statement noted that the condition precedent to eligibility to vote has been clearly prescribed by the Constitution of the Nigerian Bar Association, 2015 as amended. Importantly, he noted that the eligibility requirements are two:

Meanwhile, it was noted that the Committee has requested for the evidence of payment of Branch Dues from the respective Branches in which not all the Branches have complied.

Therefore, it was stated that failure to submit this evidence might have an impact on the eligibility of voters in the forthcoming elections.

There has been a flurry of reactions following the publication by the ECNBA of the Interim/Provisional Voters Register for the NBA 2020 National Election (“ECNBA Statement No. 005”) on the 30th day of May 2020, which has made it imperative and necessary for me to clarify and reassure all our members that no Lawyer with proof of eligibility to vote will be excluded and/or disenfranchised howsoever from the elections. However, there must be proof of eligibility to vote based on the provisions of the Nigerian Bar Association Constitution, 2015 (as amended) (“NBA Constitution”).

As I mentioned in the ECNBA Statement No. 005, the NBA Constitution stipulates two main requirements for eligibility, to wit, payments of Bar Practice Fee (“BPF”) and Branch Dues. In regard to the Bar Practice Fees, all payments are made to the designated Bank Account and there cannot be any disputation over the list of compliant members. In similar fashion and to ensure absolute transparency and credibility, the ECNBA has insisted on proof of payment of Branch dues from the branches in the form of Bank Statements, tellers or the like.

Most of the Branches inexplicably are reluctant to release to the ECNBA their Bank Statements or tellers or to provide such other credible documentary evidence in proof of Branch dues payments by its eligible members. They would rather that the ECNBA take the words of the Branch Executives and the lists produced by those Executives some of which merely stated dates of such purported payments without more. The ECNBA is at pains to explain that this is not about trust; it is all about such proof of Branch dues payments that would clothe the electoral process with absolute credibility and transparency. Without such credible proof of payments, the ECNBA opens itself up to all sorts of accusations including but not limited to importation or exclusion of names into or from the Register and it would be impossible to transparently and credibly address and resolve such accusations.

We therefore respectfully urge all the Branches that are yet to submit such proof of payments of Branch Dues by the eligible voters in their respective Branches, in the form of Bank Statements, tellers or the like, to please do so immediately and not later than the 6th day of June 2020. In the absence of such credible proof, the ECNBA has no choice but to depend on the only evidence of payments that it has i.e. the names of members who have applied for and were issued stamps. Stamps applications are routed through NBA Branches and, we know that no Branch Executive will ratify any application for stamps where the lawyer is in default of his or her Branch dues. That, for the ECNBA, is sufficient and credible proof of the said payment coupled with the fact that those Branch dues payments receipts are usually and required to be attached to the applications for stamps in support thereof.

We further urge Branches to submit their lists of eligible members in the format stated in the Statement earlier published with full particulars of members as requested.

Once again, the ECNBA wishes to assure all Lawyers that, by God’s special grace, it would conduct a free, fair, transparent and credible NBA 2020 National Elections that would be a standard, not only for the NBA but for the Nigerian polity. In particular, no eligible voter, with proof of eligibility, will be disenfranchised howsoever and the time to correct any such perceived anomaly is now, to wit, by prevailing on Branches that are yet to submit credible proof of payments of the Branch Dues by eligible voters in their respective Branches to do so now. Furthermore we implore eligible members whose names were omitted, wrongly spelt or any other correction should bring same to the attention of the ECNBA through their branch Chairmen and not individually.

We shall continue to count on the cooperation of all lawyers to ensure a successful and rancor free electoral process.