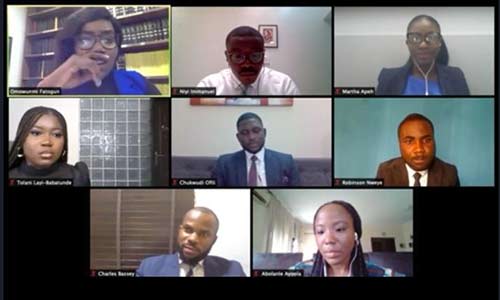 The NBA-SBL e-Conference witnessed debate sessions that kicked off with four debate topics and eight debaters, having Oluwatosin Iyayi and Damilola Wright as moderators for the sessions.

Meanwhile, the topic of the first debate session was ‘Is Digital Technology an aid or inhibitor of Legal Practice’ with Omowunmi Fatogun and Charles Bassey speaking for and against respectively. Thereafter, Omowunmi won with 94%.

Furthermore, the topic of the second debate session was ‘Are 9-5 work patterns still relevant?’ with Robinson Nweye and Abolanle Ayoola speaking for and against respectively; while Abolanle won with 69%.

In addition, the topic of the third debate session was ‘Are Nigerian-trained lawyers well-equipped for practice in the Digital Age?’ with Chukwudi Ofili and Tolani Layi-Babatunde speaking for and against respectively; while Tolani won with 80%.

Also, the topic of the fourth and last debate session was ‘Pay cuts in a COVID-era: a necessary sacrifice by all, or an unfair burden on already under-paid lawyers?’ with Niyi Immanuel and Martha Apeh speaking for and against respectively; while Martha won. Coincidentally, all the ladies won defeating the guys.

Besides, the NBA-SBL concluded its 14th Annual e-Conference with the NBA-SBL Chairman presenting an award to Nnenna Udoye as the winner for the Tare Yeri Star Award for Selfless Service to the NBA-SBL.

Finally, the Chairperson of the Conference Planning Committee; Mrs Ozofu ‘Latunde Ogiemudia, gave the vote of thanks.