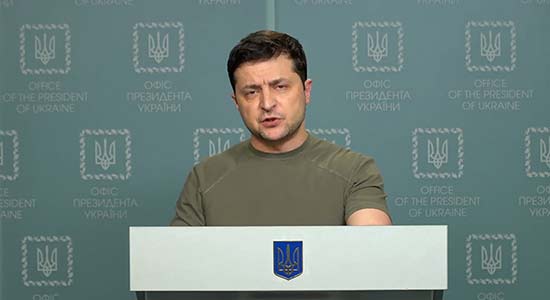 “Ukraine is applying to confirm it de jure by an expedited procedure,” he stated.

NATO was not immediately able to respond to questions about what Ukraine’s “accelerated” application to join the alliance would mean.

Ukraine is already considered an “aspirant country” for membership in the world’s biggest security alliance, along with Georgia. All 30 NATO allies would have to agree for the country to join.

NATO is wary of allowing any country to join when its borders and territory are not clearly defined.

NATO’s Article 5 defence clause – the pledge that all allies must come to the aid of any ally whose territory is under threat – would be compromised in the case of Ukraine, as it is unclear what parts of the country would join.

Earlier this year, Ukraine has been granted membership candidate status by the European Union, but member countries have warned that it would take several years for the conflict-torn country to be able to join.

‘History has called us to the battlefield,’ Putin says in a meandering speech
Zelenskyy’s statement came right after Russian President Vladimir Putin signed treaties to annex parts of Ukraine in defiance of international law, vowing to protect the newly incorporated regions by “all available means”.

In a Kremlin ceremony at the ornate St. George’s Hall to herald the annexation of the occupied parts of Ukraine, Putin accused the West of fueling the hostilities as part of what he said is a plan to turn Russia into a “colony” and a “crowds of slaves”.

In a fiery yet meandering speech that touched upon his own interpretation of Russian and Ukrainian history and allegations that the US and the West are attempting to corrupt the Russian society, Putin portrayed Russia as being on a historical mission to reclaim its post-Soviet great power status and counter Western domination that he said is collapsing.

“History has called us to a battlefield to fight for our people, for the grand historic Russia, for future generations,” he said.

The hardening of his position in the conflict that has killed and wounded tens of thousands of people further cranked up tensions, already at levels unseen since the Cold War.

Russia’s annexation of the Russian-occupied areas of Donetsk, Luhansk, Kherson and Zaporizhzhia has been condemned in the West and beyond.

UN chief Antonio Guterres called it a “dangerous escalation” and a violation of the United Nations charter.

“It can still be stopped. But to stop it, we have to stop that person in Russia who wants war more than life. Your lives, citizens of Russia,” Zelenskyy said in a Thursday evening address.

The Russian annexation, held after what the West denounced as phoney referendums at gunpoint in occupied territory, followed weeks of defeats for Moscow’s forces on the battlefield in which they were routed from their positions in Ukraine’s northeast.