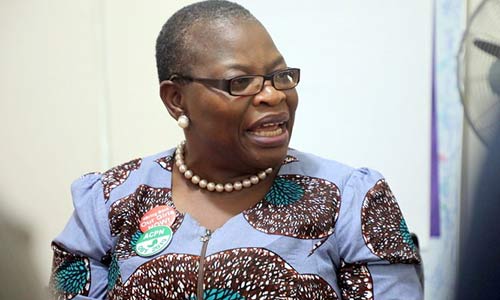 Oby Ezekwesili, former minister of education, has described President Muhammadu Buhari as a “completely out-of-touch leader” over his directive to the Central Bank of Nigeria (CBN) to stop providing foreign exchange for food importation.

In a statement issued on Tuesday by Garba Shehu, presidential spokesman, the president said he had asked the CBN to stop issuing foreign exchange for food importation so as to stimulate the growth of agriculture and to ensure food security.

Some Nigerians have criticised the president’s directive. Kingsley Moghalu, former deputy governor of CBN, said such an economic policy should not be imposed on the CBN by a political authority, and that the bank has lost its independence.

“Nigeria’s entire economy appears to have been sub-contracted to our central bank, including industrial and trade policy. In the process the economy has fared poorly and the Bank has lost its independence. This is sad,” he said.

Ezekwesili also lashed out on the president on Twitter, saying he is living in a bubble.

”A completely out-of-touch ‘leader’. He is cocooned away in the grandeur of @AsoRock where they serve him delicatessen and praise-sing to him: ‘ranka dede sir’, your agriculture policy is working wonderfully. All farmers in Nigeria are now billionaires & exporting to the US,” she said.

The CBN said it will proceed with the president’s directive and that the implementation of the forex ban on food import would be in phases.

We all know that @NGRPresident @MBuhari has absolute contempt for Data but we shall go ahead and put out here some of the Knowledge he should have had before making this latest blunder of ‘Directing’ what should be an independent @cenbank to “not give a cent for food import”.

FEWS Net is Famine Early Warning Systems Network. It “uses an integrated approach that considers climate, agriculture production, prices, trade, nutrition, and other factors, together with an understanding of local livelihoods.”