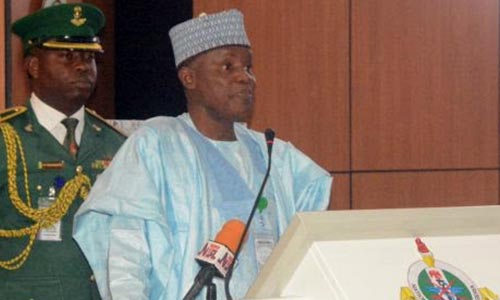 He lamented the negative effects ethno-religious agitators have had on national security in recent times.

Magashi, who spoke to State House Correspondents on Thursday during the weekly Ministerial Briefing, organised by the Presidential Communication Team, said these activities, which he also blamed on selfish elites, are causing the country to bleed.

He said while incidents of domestic terrorism have reduced due to measures put in place by government, other problems arising from intolerance have heightened.

He cited the emergence of herders/farmers clashes, IPOB issues, banditry among others, who he said see violence as a legitimate alternative as the new threats to national security.

“Make no mistakes that our nation is bleeding now. It is bleeding because of the self-interest and other primordial considerations underlying decisions, which quite a number of our elite; political, ethnic and religious, make it so. Such elites are quick to attribute blames to groups other than theirs.

“The whole idea is to exploit the social division for their political gains and it is because of this divisiveness that Nigeria lacks a national consensus or common comprehensive understanding and the interpretation of what national security is, e.g Boko Haram, farmers/herders clashes, IPOB and other political associations that are coming up with different mandates and different concerns. All these can encourage groups to seek violence as a legitimate alternative.

“From here emerges a narrow vision of national identity and vision which threatens our country’s prospect of social cohesion and stability. This is why we’re seeing the rise of self- help syndrome, often endorsed by states and local elites seeking violence as a legitimate alternative.

“The rise in vigilantism and identity-based militia, who claim to be working for the political and ethno-religious emancipation of their people aka resource control, secession and regionals self-determination, define the potent threats to the national security in our country,” he said.

According to him, government had come up with a comprehensive report on the identified enemies and taken a position, which he said he won’t preempt.

He also confirmed some individuals who fund Boko Haram have been arrested particularly in Kano state.

Magashi said the military would not be deterred but focused on eliminating all perceived threats.