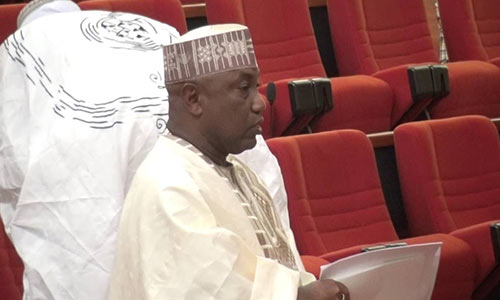 Senator Kabiru Gaya, the Chairman of the Independent National Electoral Commission panel said he voted against his committee’s recommendation on electronic transmission of results because the amended version was better.

Those who voted against electronic transfer of results hinged their decision on the fact that the NCC had said only 43 per cent of Nigeria had internet network.

The Senate, however, on Thursday, finally passed the long-awaited Electoral Act (Amendment) Bill, 2021 after division among its members on electronic transmission of results.

The approval came following an amendment to Clause 52(3) by Senator Aliyu Sabi Abdullahi (APC, Niger North) during consideration of a report by the Committee on Independent National Electoral Commission (INEC).

Gaya said, “I did not vote against my bill, Senator George Sekibo who accused me of doing so was just playing to the gallery.

“If you prepare something and you later saw an improved version of it, you can go for it.

“There is nothing wrong if the chairman of a committee support the amended version of a report he presented.

“It is not possible as it is, to transmit election in one part of the country and refused to do so in other part.

“It has to be uniform. The card reader can work anywhere in the country but you need network coverage to transmit results.

“Although INEC has said it is ready to do electronic transmission of results, but we have to involve the NCC and the National Assembly to create check and balances.

“The NCC will come to the National Assembly and we will determine whether its claims were practicable or not NCC.”

The Chief Whip of the Senate, who is representing Abia North Senatorial District, Orji Uzor Kalu, attributed his reason for voting against the committee’s recommendation to the fact that there was no network coverage in his town.

Kalu, a two time governor of Abia State, said, “I am voting No because there is no telecommunications network in my village and I will not want my people to be disenfranchised.”

Recall that the Senate ruled out the possibility of having results transmitted electronically when it voted that the Nigerian Communications Commission, with National Assembly approval, would determine whether the Independent National Electoral Commission could transmit results electronically or not.