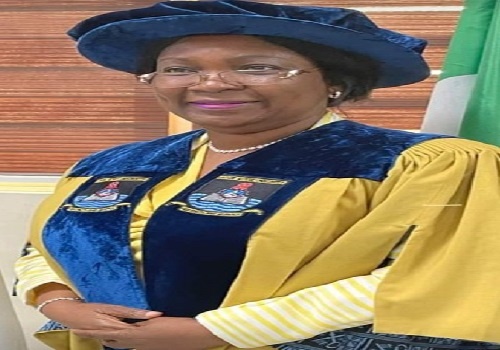 The Professor of Physiology had served as Acting Vice Chancellor of the institution before her elevation.

Her appointment was announced on Thursday morning.

Olatunji-Bello was born in Lagos on the 23rd of April 1964 to (Mrs.) Jadesola Ibidapo nee Abraham of Ita Kose , Lagos Island and Mr Emiola Ibidapo-Okunrinboye of Owo, Ondo State.

She proceeded to Methodist Girls High School, Yaba, and Lagos State College of Science and Technology, Ikosi Campus where she did her “A” levels in 1982.

Prof Olatunji-Bello thereafter attended the prestigious University of Ibadan where she bagged a BSc (Hons) Physiology in 1985.

She was appointed a Fellow of the society for Environmental Toxicology and Pollution Mitigation in the year 2019.

She assumed duty as the First Professor of Physiology in Lagos State University College of Medicine on the 2nd of October, 2007

Olatunji-Bello has held several professional and administrative positions both at UNILAG and LASU.

Until her election as the First female Deputy Vice Chancellor of LASU, she was the First substantive Head of the Department of Physiology, LASUCOM. Other University managerial positions held by Professor Olatunji-Bello include:

She is the pioneering Director of LASU Directorate of Advancement which was established by the Vice Chancellor Prof Lanre Fagbohun in 2016.

The distinguished scientist is known for her very brilliant academic work and she has over 53 publications to her credit; excluding papers she has read at both local and international conferences.

She has served as Chairman Organizing Committee of an International Conference of the International Union of Physiological Sciences and Association of African Physiological Societies in 2016. She has also contributed chapters in some textbooks and e-learning materials.

She is happily married to Tunji Bello, a journalist and lawyer, and the Commissioner for the Environment and Water Resources, and the former Secretary to Lagos State Government.

They are blessed with 3 children.

She is the Area Pastor in charge of the Testimony Chapel, an area under Lagos Province 1 of the Redeemed Christian Church of God(RCCG).