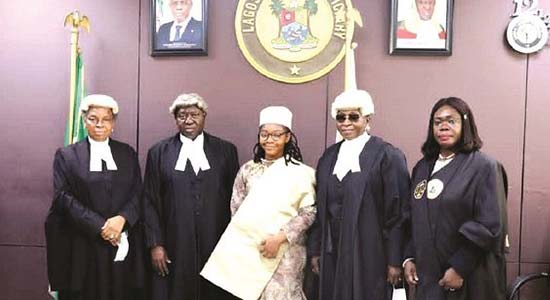 Her visit to the State Judiciary, was historic being the first time that the Judicial arm of the State would be hosting the State’s One Day Governor since the initiative was instituted over 20 years ago.

During the visit, Eniola interacted with members of the top echelon of the State Judiciary.

Miss Eniola, who became one day governor following her winning of the Spelling Bee Competition, commended the Judiciary for ensuring timely delivery of justice in spite of the effects of last EndSARS protest on the Judiciary’s operations.

Miss Ajala in her interaction with the State Chief Judge, Justice Kazeem, commended the state Judiciary for its efforts in ensuring fair dispensation of justice for all regardless of status, religion or creed.

The one-day governor who was accompanied by other runners-up in the competition during the visit, charged the Judiciary to uphold its integrity in the dispensation of justice.

“Let integrity continue to be your watchword as you go about attending to numerous cases in the state”, she pleaded.

Earlier, Justice Alogba welcomed the governor to the Judiciary while also applauding the originator of the One Day Governor, describing it as a very laudable initiative that had stood the test of time.

Alogba applauded Ajala for demonstrating rare eloquence and determination among her peers and for standing out in the midst of others.

He, however, implored her and other winners of the Spelling Bee competition not to be complacent with the recognition accorded them by the state government but rather remain steadfast and aim for greater accomplishments.

The visitation to key government officials, according to the Director-General, Mrs. Abiola Seriki-Ayeni, was informed by the need to motivate winners of the Spelling Bee and also encourage other students in public schools to aspire to excel in their academic pursuits.

She said: “Office recognises the hard work that these pupils from public schools put in their academic, hence the need to reward them adequately.”

Seriki-Ayeni disclosed that apart from the privileges of meeting top government officials across the state, the Spelling Bee winner will equally be sent on a trip to Finland alongside other Runners Up as part of the reward for their hard work and dedication to their studies.

It would be recalled that the former First Lady of Lagos State and the founder of New Era foundation, Senator Oluremi Tinubu, who is currently representing Lagos Senatorial District in the National Assembly, initiated the Spelling Bee Competition during the tenure of Asiwaju Bola Ahmed Tinubu as the then Governor of the State.