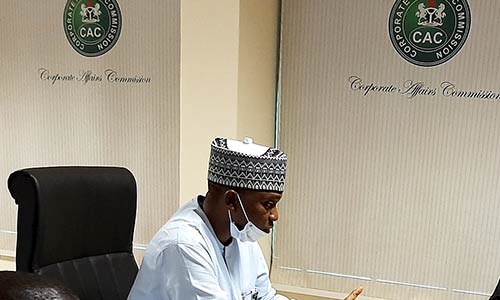 The Corporate Affairs Commission (CAC) has disclosed that it has contributed over N2.7 billion revenue to the Federal Government.

Speaking on Monday in Abuja, the Registrar-General of the Commission, Alhaji Garba Abubakar stated that “for the first time, we (CAC) paid operating surplus of over N2.7 billion to the Federal government.

“In fact, if not for these outstanding operating liabilities, the surplus would have been far more than N5 billion. We are hoping that this year will be different.

“And as a government organization, we have an obligation to support the government to achieve all its developmental objectives,” he noted.

Abubakar explained that the agency’s contribution was made possible due to policies that were instituted by the management.

“Our resources have been prudently managed, we had a projected revenue target in 2020, we closed the year with over N19 billion because of the policies that were instituted by the management.

“We cut waste and we blocked leakages. One of the leakages we discovered in the past was the cloning of some of the remittance receipt.”

The RG further explained that with the upgrade of the Companies Registration Portal (CRP), it was difficult for such fraud to continue.

“With the new system, there is an application that shows you the total number of transactions that were approved,” Abubakar stated.

He also said that the agency has discharge over 85% of the outstanding pension arrears owed works in the past.

“We have paid the outstanding pension arrears from 2017 to 2019, we did not pay from March 2019 to December due to financial challenges,” adding that the balance will be paid in due course.