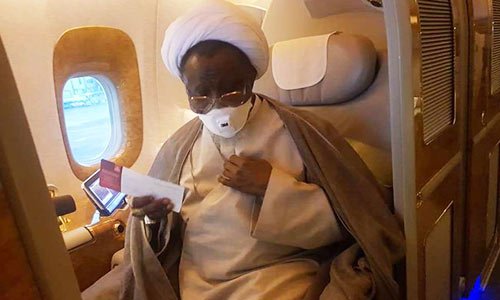 The Attorney General of the Federation (AGF) and the Director-General of the State Security Service (DG, SSS) have denied seizing the international passports of the leader of the Islamic Movement in Nigeria (IMN), Ibrahim El-Zakzaky and wife, Zeenah or preventing them from travelling abroad.

They also faulted claim by El-Zakzaky and wife that the Federal Government frustrated their last medical trip to India, arguing the IMN leader’s “cantankerous acts” accounted for why he was sent back from India.”

The AGF and the DG, SSS also denied preventing them from travelling outside the country.

They spoke in their separate counter-affidavits filed in response to the fundamental rights enforcement suits filed by El-Zakzaky and his wife before the Federal High Court in Abuja.

El-Zakzaky and his wife accused the AGF and the DG, SSS of among others, seizing their passports marked: A50578739 and A50578740 and preventing them from travelling abroad for medical treatment.

They accused the DG, SSS of refusing to respond to a letter by their lawyer, demanding for the release of the passports.

The DG, SSS (named as the first respondent in both suits), in the counter affidavit, faulted all the claims by the applicants, argued that the suits were speculative and prayed the court to dismiss them.

“The first respondent did not at any time collect, take nor keep the applicants’ international passport or any other travelling documents of the Applicant;

The AGF (sued as the second respondent) made similar argument in is counter affidavit and prayed the court to reject the suits.

Part of the counter-affidavit reads: “The second respondent did not authorise the seizure of the applicants’ international passport or any other travelling document and is also not in custody of same and has not acted in any way to prevent the applicants from travelling outside Nigeria.

“The second respondent did not direct the Nigerian immigration Service to place any form of travel ban or restriction on the applicants and is also not aware that the first respondent ever issued such directive.

“The Nigerian immigration Service has also not stated that such ban or restriction exists at the instance of any of the respondents.

On the applicants’ claim that they needed to travel abroad for medical attention, te AGF stated that there was no fresh evidence that the applicants suffer from any health challenges.

“That the entire depositions in relation to the health of the applicants have been heavily slanted and exaggerated. The applicants’ Exhibits 5 & 6, which are based on allege tests conducted two years ago in 2019, do not convey a situation of emergency or medical condition that cannot be adequately treated in Nigeria.

“The said Dr. Ramatu Abubakar and Dr. Kazim A. Dhalla did not conduct any test on the applicants in years 2020 and 2021.

“The applicants do not have any foreign medical appointment in any country which is being jeopardise by the alleged absence of their international passports.”

The AGF noted that the applicants were allowed to travel to India and the hospital on their choice in 2019 following an order to that effect made by a High Court of Kaduna State on August 5, 2019.

“The choice of india and Medanta Hospital in New Delhi were the exclusive decision of the applicant (El-Zakzaky) and his team. That the second respondent was not part of the trip to India.

“As widely reported in the media, on arrival in New Dethi, the applicant (El-Zakzaky) exhibited cantankerous acts which were suggestive of the fact that his mission in India transcends medical treatment, because the applicant, who claimed to he critically ill insisted on being lodged in a five-star hotel.

“Nigerian security agents only supervised his medical trip as ordered by the court. Contrary to the depositions in paragraph 5(d) of the supporting affidavit, the applicant frustrated his own medical treatment,” the AGF said.

El-zakzaky and his wife stated in their suits that their passports were last seen in possession of the National Intelligence Service (NIA) which has officially denied being possession of te passports.

They stated that subsequent to the claim by the NIA, they declared their passports lost, adding while attempting to renew the passports through the Immigration Service, it was revealed that their passports had been flagged by the SSS.

They added that all official requests to the SSS to remove the restriction have since then been ignored.

They argued that the alleged seizure of their passports and their inability to travel for medical attention constituted violation of their fundamental rights.

The applicants added that, in the absence of any court order, the seizure of the passports by the respondents constituted a threat to their life, since they have denied them the opportunity to seek urgent medical attention outside the country as recommended by their physicians.

El-Zakzaky and is wife, who are each seeking N2billion damages, want the court to compel the respondents to release the passports to them and lift the ‘Red Flag’ restrictions on their passports.

They are also praying the court for an order of perpetual injunction stopping the respondents from further harassing and intimidating them.

Meanwhile Justice Inyang Ekwo has fixed hearing in both suit for January 19 next year.