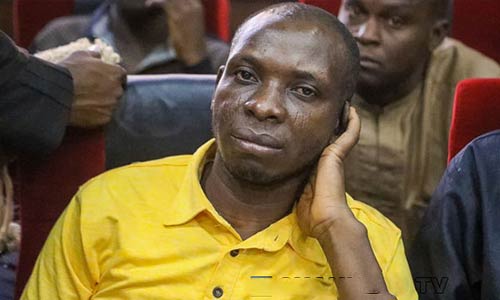 A Federal High Court in Abuja heard on Monday how a team of soldiers, attached to the 93 Battalion in Takum, Taraba State, attacked a police team that had gone to arrest a suspected kidnap kinpin, Hamisu Bala (Wadume).

An Assistant Superintendent of Police, Felix Adolije, who said he led the police team sent to effect the arrest, gave details of how his team was ambushed by the soldiers allegedly led by Captain Tijjani Balarabe.

Adojie, who was testifying as the first prosecution witness in the trial of Bala and six others, said three policemen and two civilians died while five other police officers were injured in the attack that took place on August 6, 2019 in Ibbi town, Taraba State.

Led in evidence by a lawyer from the Federal Ministry of Justice, Magaji Labaran, Adojie thanked God for spearing his life to enable him recall all that transpired.

Adojie said it was stated in the petition some kidnap suspects, who were unidentified then, made a demand of N200m ransom from relatives of their victim.

The witness said when his team analysed the four phone numbers with which the suspects were making the demand, it led his team to “a soft target” in Taraba State, Bashir, who in turn led them to Wadume in Ibbi, on August 6, 2019.

Adojie said his team, made up of six officers, later left it base in Abuja for Jalingo, the Taraba State capital, on August 5, 2019.

The witness said his team first reported at the headquarters of the Taraba State Police Command in Jalingo on August 6, 2019 to brief the Commissioner of Police, about their mission.

He said his team was given an introduction letter to the Area Command in Wukare where their arrival was documented and were documented to back their mission to Ibbi Police Station, from where they would set out to arrest Wadume.

Adojie explained the person he referred to as the “soft target” was named Bashir, (who is now deceased.)

Hesaid Bashir led them to Wadume’s house in Ibbi, Taraba State, adding: “The pointer was with us and he led us to the street where the main target lived.

“On getting there, he pointed to the main target from inside the bus. So I came down with Inspector Sani in our complete uniforms without our cap and jacket. I asked Sani to remain standing by the bus.

“I brought my identity card out. I realised that the target was with 10 boys lying down on the mat. I showed him my identity card. I told him we were policemen from IRT (Intelligence Response Team) in Abuja.

“I told him that there was a case we were investigating and that his attention was needed in Abuja. Neither he nor any of his boys asked any question. Quietly, he got up and followed me to our bus.

“I asked him to follow us and he followed us. There was no argument between us and anybody. We entered the bus. I asked one of my boys inside the bus to restrain him. Then we drove back to the police station.”

Adojie added he informed the Station Officer that they had completed their mission and was heading back to Abuja.

He said unknown to them, the soldiers at the last of the three checkpoints they encountered while arriving the town, had been alerted about their mission.

“As we were going back, we got to the last army checkpoint which we encountered when we were coming in.

The checkpoint was the first as we were going out. They (the soldiers) asked us to stop. They saw us in uniform. Then, one of the soldiers asked us where we were coming from.

“We told him we were the ones whom they passed about 30 minutes earlier. Then one of them asked us if we did not know that the person in our vehicle was a very influential person in the town?

“I already alighted when he asked me that question. I said I didn’t know who even told him that we had made an arrest and I told him, ‘please we are still going far, allow us to go’.

“Then, he reluctantly removed our barrier to allow us to go. On getting to the second checkpoint mounted by the mobile policemen, they only asked us if we were through. And we said yes.

“Then we headed towards the last one mounted by soldiers. As we were in between the mobile policemen’s checkpoint and that of the soldiers’ ahead, I saw a Sharon bus with full light.”

He said the soldiers’ at the checkpoint removed the barrier without asking any question, adding that their vehicle had barely passed when they started hearing gunshots.

The witness said: “I saw an army Hilux with gun mounted on top, overtook the Sharon bus.

“The soldiers started firing. Then our bus started staggering and somersaulted three times. I was seated with the driver in the front. He fell to my side. Then I struggled, by the grace of God, and came out of the vehicle.

“I left my AK-47 and pistol inside the vehicle. I started running. There were heaps of yam on the other side of the road.”

The witness told the court he managed to scamper to a tree for safety and quickly removed his uniform.

He said his colleague, Sergeant Emmanuel, whom he came across around the place, also removed his uniform.

Adojie said the time was around 7 or 7.30pm. He said he and Emmanuel passed the night under the tree.

The witness said they found their way to the main road between 5.30am to 6am the following day.

He added that on getting to the main road, they sought the help of a motorcyclist to lead them to the nearest village.

The witness said: “Immediately we got to the village, he (the motorcyclist) started speaking their language. All their youths and men started coming towards us with cutlasses saying we were the kidnappers of yesterday.

“That was where I received the highest beating of my life. When they were beating me, I held on to my identity card telling them that we were policemen from Abuja.”

He said the youth leader in the village rescued him and his colleague from the mob and took them where some mobile policemen were.

“The mobile policemen called the Area Command which brought a patrol vehicle and conveyed us to General Hospital Wukare,” he said.

On where Wadume was after the attack, Adolije said: “He was with us in the bus before the attack. When the bus somersaulted and everybody ran for his dear life, I did not know his position at that time.”

When asked if he could recognise Wadume, the witness pointed to the defendant in the dock.

At the conclusion of Adojie’s testimony, lawyers to the defendants elected to return another day for cross examination of the witness.

The defence lawyers – Ishaka Dikko (SAN), M. I Toga,Abass Ajiya, Kuzaet Magaji and F. O Fagbemi – later moved the bail applications they filed for their clients, which Labaran objected to.

Justice Binta Nyako adjourned till July 1 for ruling on the bail application and continuation of trial.

Meanwhile the prosecution did not say anything on Monday after what was delaying the production of the 10 soldiers, including Capt. Balarabe, who were named in the earlier charge filed.

The 10 soldiers, who were initially charged with Wadume and nine others, had their names removed from an amended charge filed when the AGF took over the case from the police prosecution team that started the case.