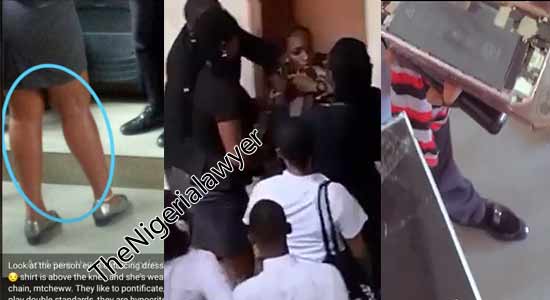 There was commotion at the Faculty of Law, Rivers State University (RSU) this afternoon as the Dress Code Enforcement Committee set up by the Dean of the Faculty to ensure strict adherence to the Faculty dress code went physical with a female student who allegedly breached the code.

In most law faculties in Nigeria, adherence to the dress code and other rules are mandatory and mechanisms are usually put in place by Faculty managements to punish offenders either with fines or other sanctions.

However, in a dramatic video which is currently gaining wide attention, lecturers who are said to belong to the newly constituted Enforcement Committee in RSU Faculty of Law are seen physically assaulting a female student for allegedly violating the hair regulation for female students of the Faculty.

In the video, a female lecturer identified as Blessing Timothy was pulling the student, Princess Amadi by the hair and attempting to forcefully cut her hair with a scissors while being aided by a male lecturer, Melford Itari.

According to TheNigeriaLawyer findings, the new Enforcement Committee which was empowered to begin its operations from next Monday was on a sensitization tour across the various classes when the student, Princess was accosted by the female lecturer, Blessing, who quizzed her over her hair.

In her response, Princess reminded the lecturer that the regulations published allow ladies to plait black or dark brown hairs and insisted that her hair was in line with the dresscode.

But the lecturer retorted and maintained that the hair contravenes the extant dresscode and chided Princess for “talking back at her”, saying she will cut the hair even though the Committee’s mandate was yet to commence.

Her move to cut Princess’ hair was met with resistance which resulted in the dramatic scene seen in the video.

According to sources, the male lecturer subsequently stepped into the scene and ensured the hair was cut with the scissors.

In a similar development, in another video, the students captured smashed phones that were reportedly destroyed by the male lecturer, Mr. Melford Itari for recording the earlier scene were Princess’ hair was cut.

Some students of the Faculty have called out both lecturers for what they described as hypocrisy and double standards.

One of the students posted a zoomed in picture of Mrs Blessing Timothy which showed her skirt way above knee level, with leg chain on her foot, with the caption:

“Look at the person even enforcing dresscode. Skirt above the knee and she’s wearing leg chain mtcheww. They like to pontificate, they play double standards, they are hypocrites.”

Reacting to the development, the Law Students Association of Nigeria, the National umbrella body for undergraduate law students in the country has condemned the actions of the lecturers.

In a statement made available to TheNigeriaLawyer, the Attorney General of the Association, Kelechi Nwodo, said issues of physical assault against law students in faculties across the country in the guise of dress code enforcement has reached an alarming and very embarrassing level.

“As law students, we are taught to be civil and law-abiding in the resolution of disputes.

There are organised mechanisms for sanctioning erring law students in all faculties, thus, the result to physical harassment by law lecturers who should be examples to us is highly disgraceful to what the profession stands for”.

The Association called on the Dean of the Faculty of Law, Rivers State University to caution the said lecturers against the violation of the students constitutional right to dignity of person while also compensating those whose phones were destroyed.

“That is the only way to redeem the image of the Faculty and the legal profession at large from the scandalous actions of those lecturers who in a sharp paradox from what they ought to be, decided to run foul of the law by physically assaulting students” the statement read in part.