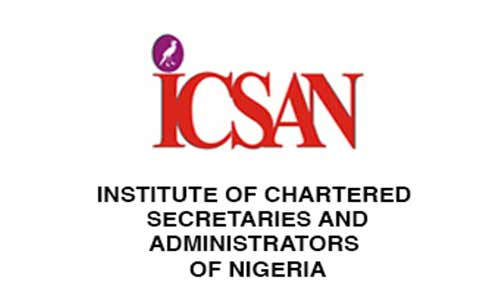 The Institute of Chartered Secretaries & Administrators of Nigeria, ICSAN, has described the controversy over who is authorized to collect Value- Added Tax (VAT) between the federal government of Nigeria and States in the federation as unnecessary, saying that every State governor should focus on developing its human resources to boost economic growth and development.

At a media brief in Lagos Friday, the president/ chairman of the council of the institute, Taiwo Owokalade, asseverated that there was no need to heat the polity over VAT but both the federal and States government should look inward to see how they can give meaning to citizens by maximizing human, material and natural deposits.

“The governments across levels must strive to build their human and natural resources toward engendering self-reliance and more economic viability. The act of depending on federal allocation for survival by federating states will hamper industrial, enterprising and resourceful spirit of the people and encourage laziness. Let every State develop its potential,” he stressed.

ICSAN’s president charged both federal and state governments to accept the outcome of the final pronouncement by the court, he urged tax, Legal and other professionals to aptly make their inputs to avoid escalating the issue, saying that there are more dire problems currently bedeviling the country which need to be tackled head-on.

“There is no need heating up the polity over VAT. We all are involved. We need to tackle more serious problems ravaging us as a country. Let every State look inward and bring the best from their human resources. If the court says VAT is the exclusive right of the federal government, does it mean the States cannot survive? Or if reverse is the case, does it mean the federal government cannot give people meaningful life without VAT?