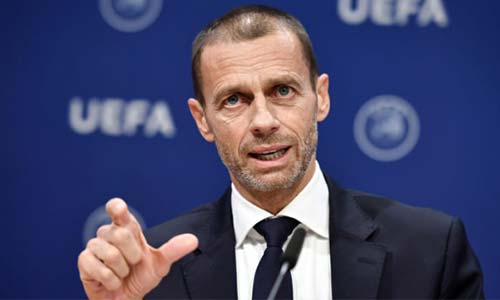 UEFA plans to expand its use of VAR, but president Aleksander Ceferin said on Wednesday he wants the system and the rules to be clearer and faster.

He told a press conference after a UEFA Executive Committee meeting that the organisation planned to ask the International Football Association Board (IFAB), which manages the rules, to clarify several issues.

Ceferin emphasised that UEFA was committed to video replay. He suggested the bigger problem was overcoming the reluctance of teams and their fans to accept they have been fairly beaten.

“Why not go back?” he asked. “Because there would always be teams who think they lost because VAR did not exist. We always complain when we lose because of a mistake.”

“We need to make the technology clearer, faster, less invasive”, he said. “But it will stay… And that’s why we have to try to improve it.”

“One is, for example, offside. The line is very thin, and it’s drawn by VAR, so it’s a subjective line of an objective fact, which is a bit strange,” he said.

Ceferin said agreement on handball was also a problem. He said retired Italian referee Roberto Rosetti had conducted a session at UEFA for leading coaches which highlighted the disagreements.

“For me it was strange when we had elite coaches visiting us, all the top coaches of European football, of world football,” said Ceferin. “When Roberto Rosetti showed a ball that touched a hand, half of them said ‘handball’, half said ‘no way’.”

Ceferin also cited the confusion caused when referees reviewed an incident in an earlier phase of play. He cited a Champions League match on November 28. Inter Milan put the ball in the net only for the goal to be disallowed because VAR showed an earlier foul at the other end. Slavia were awarded a penalty. Inter thought they were 2-0 up, but found themselves at 1-1.

“How far do we go, do we check five minutes, do we check 15 minutes?” he asked. He added that, in the past, “the referee never said ‘seven minutes earlier there was a foul so we go back.’ The game is changing and we are afraid it is changing too much.”

IFAB will meet again on February 29 in Northern Ireland to consider potential rules changes to be introduced on June 1.

UEFA said on Wednesday that it will use VAR in the qualifying play-offs for Euro 2020 at the end of March, as well as in the European zone qualifiers for the 2022 World Cup, which will begin in March 2021.