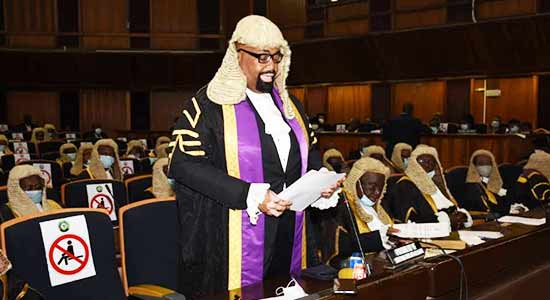 The President of the Nigerian Bar Association, Mr. Olumide Akpata, has applauded the retiring Chief Judge of FCT High Court, Hon. Justice Ishaq Usman Bello, for what he described as “Stellar career” and for having an “intimidating Curricular Vitae (CV)”

This is contained in a speech he delivered at the valedictory court session in honour of the retiring Chief Judge on January 5, 2021 at the Ceremonial Hall of the Court.

Akpata described as “fitting” the appointment of Justice Bello as Chairman of the De-Congestion Reforms of the Correctional Service Centers.

“What a Jurist! A Jurist that shook the conscience of the Nigerian Justice System and set free nearly four thousand (4,000) wrongfully detained citizens. A Jurist whose foresight and doubtless hindsight, introduced the CIMS, an information management system, to help officials in the administration of justice see into the system of the Nation’s correctional centers to detect and manage problems. My Lord’s determination to focus on the prison reforms heralded the much-needed de-congestion of the Centers.

“It was only therefore fitting for My Lord to be appointed by the President of the Federal Republic of Nigeria as the Chairman of the De-Congestion Reforms of the Correctional Service Centers. Obviously, My Lord’s humanity has shown, even in the change in nomenclature from the Prison Service to the Correctional Center, in keeping with the purpose of incarceration – which is reformation.

“In unwittingly preparing himself for this national assignment, My Lord had spent much of his early days in service visiting prisons and police stations, for a clearer and better understanding of the areas of change and reform, whenever the opportunity to introduce such reforms presented itself. I remember listening to My Lord speak of always doing two things when appointed to a new judicial division; visiting the prison facilities, and the police stations, to ensure My Lord is educated on where those sentenced will be sent to only when absolutely necessary.” Akpata said

Furthermore, Akpata applauded Justice Bello for making FCT High Court ICT compliant and was particularly impressed that judgements of the Court are accessible in the court’s website. He said is a no mean feat.

He said, “I must not fail to recognize the very impressive adoption of technology in dispensing justice under the watch of My Lord. In particular, on the use of Information Communications Technology (ICT), and having Courts that are compliant. I say this because, today, we now have some decisions of the High Court of the FCT on the Court’s website. Having a system where the decisions of the Court can be easily accessed online, is not a mere feat, given the fact that most Courts, including the Appellate Courts do not have such a system in place.”

In conclusion, Akpata expressed confidence that, though Justice Bello seemed to have covered the field with almost nothing left to be done, successor will do better

The speech reads in part, “In concluding this address, I must say with all sense of responsibility that My Lord’s achievements during the period of service, whether as Acting and Substantive Chief Judge of the High Court of the FCT, are most enviable. I am almost wondering if there would be anything left for My Lord’s successor to do in office, considering that My Lord has greatly covered the field. But knowing the depth of the Bench in the High Court of the FCT, I am certain that My Lord’s successor will not only improve on My Lord’s accomplishments, but also surpass them.

“I will again refer to My Lord’s CV and will say, the younger generation, and I dare say contemporaries, can draw inspiration from. I thank you, My Lord, for the days of service that you have given to the Judiciary. I can only wish My Lord the best in the coming days. Of course, this can only be the beginning of a more excellent career even in retirement. Knowing My Lord to be who he is, I doubt My Lord has plans to go to rest at this point, so I will be looking out for those exploits My Lord will be performing hereafter.

“On a more personal note, I commend My Lord for similarly creating a fine balance between the very tedious task of a Judicial Officer and a manager of his health. It is not uncommon to have Judges/ Justices suffer bad shape of health either in service or at retirement. I use this opportunity to admonish our revered Judges/Justices to pay utmost attention to matters of their health. This is very important.

“On behalf of the Nigerian Bar Association, I want to congratulate My Lord, Hon Justice Ishaq Bello, the retiring Chief Judge, High Court of the FCT, for a meritorious service to the Nigerian legal system. I can only wish you the best in retirement.”