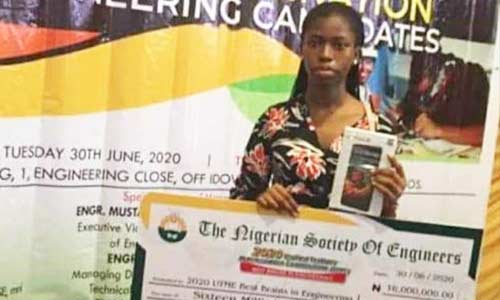 The Nigerian Society of Engineers (NSE) has granted a N16m scholarship to 16 candidates who had the highest scores in this year’s Unified Tertiary Matriculation Examination (UTME).

The beneficiaries, who have shown interest to study mechanical, industrial production, electrical, computer as well as civil engineering in the country’s universities, will be receiving N200,000 per year for the next five years if they gained admission this year.

The Joint Admissions and Matriculation Board (JAMB) had earlier unveiled 13 candidates with the best results in its 2020 exams and Egoagwuagwu Agnes Maduafokwa, a female student, who hails from Anambra, came top with 365.

She was followed closely by Nwobi Okwuchukwu David, also from Anambra, with 363 while the third spot was jointly occupied by Ojuba Mezisashe Shalom and Elikwu Victor Chukwuemeka – from Edo and Delta states respectively — with a score of 359.

Babagana Mohammed, the NSE chairman, who spoke virtually at the unveiling of the candidates in Lagos, on Tuesday, said the gesture was in line with the institution’s strategic mission and objective of getting more Nigerians to study and practice engineering.

“The registrar of JAMB sent me a message that one of his directors is going to join me on this line; Lawal Yusuf and what he advised me to say is that anyone of them that gets admission and is matriculated will enjoy the scholarship,” he added.

“He said not all who got good results would get into school and I asked why. He said some are below age and some schools have a standard and if you don’t meet up with that age, you cannot get admission. That is what the registrar of JAMB sent just now.”

“But for the records, we are going to give a scholarship of five years to each candidate that gains admission. If you gain admission next year, you are still entitled. That is the advice I got from JAMB.”