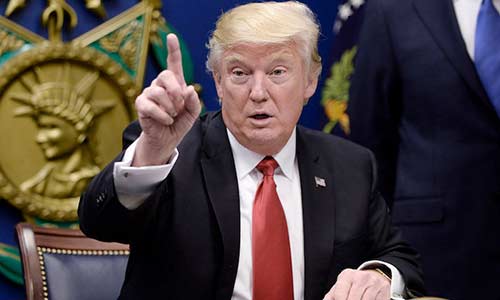 President Trump announced Friday that he had sanctioned Iran’s national bank, calling them the “highest sanctions ever imposed on a country.”

Trump made the comments to reporters during an Oval Office meeting with Australian Prime Minister Scott Morrison. The announcement comes two days after Trump said he had instructed the Treasury Department to increase sanctions on Iran following attacks on two oil facilities in Saudi Arabia.

Trump told reporters Friday that the sanctions go “right to the top.”

Secretary of State Mike Pompeo has blamed Iran for attacks on two oil facilities in Saudi Arabia over the weekend, calling them an “act of war.” Trump, however, has appeared hesitant to definitely blame Tehran for the attacks, saying it appears Iran is responsible but that he would wait for a full U.S. intelligence assessment.

Iran has denied responsibility for the attacks, for which the Iran-backed Houthi rebels in Yemen have claimed responsibility. Iran’s foreign minister warned that an attack on Iran would escalate into “all-out war” following Pompeo’s remarks. Saudi Arabia has said that Iranian weapons were used in the attack but has stopped short of definitively blaming Tehran.

Trump has also been noncommittal as to whether he would pursue military action against Iran in the wake of the attacks, after first hinting at it on Sunday when he said the U.S. was “locked and loaded” following the drone strikes on the oil sites and waiting on confirmation from Saudi Arabia.

Trump told reporters Monday that he wanted to avoid war with Iran, while at the same time emphasizing the strength of the U.S. military.

On Wednesday he said was considering “many options” including the “ultimate option,” which he said was war.

“We’ll see what happens. We have many options that we’re considering. There are many options,” Trump told reporters while on a fundraising swing through California, as he stood next to his new national security adviser, Robert O’Brien.

“There’s the ultimate option and there are options that are a lot less than that,” the president continued.

The U.S. military was said to be briefing Trump Friday with several options to respond to Iran, including airstrike targets, and reportedly will warn him that military action against Iran could result in war.

Tensions between the U.S. and Iran have run high following Trump’s decision to withdraw from the six-country nuclear pact with Tehran brokered during the Obama administration, and escalated in recent months.

Still, Trump had left open the possibility of meeting Iranian President Hassan Rouhani at the upcoming United Nations Global Assembly (UNGA) and expressed optimism on Iran’s willingness to make a deal to ease the confrontation, saying economic sanctions have hurt the country badly.

The recent attacks, however, have seemed to jettison the possibility of a meeting at the U.N. next week.