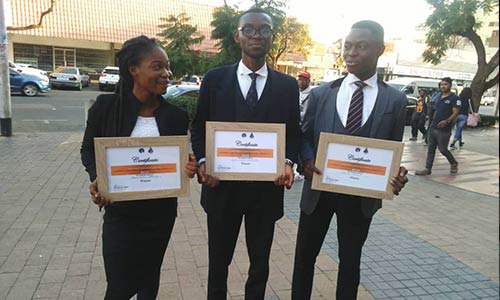 The students of the Faculty of Law, University Of Calabar just recently won the African regional oral rounds of the Manfred Lachs Space law moot court competition which took place from 9th to 10th May 2019 in Pretoria, South Africa and they will be advancing to represent the African region at the World Finals in Washington D.C, USA.

The University Was ably represented by three students namely: Nelly-Helen Neji Ebruka, Kaunda, John.C, Augustine Eneji Ushie, who competed with Makerere University and the University Of Pretoria to advance to the finals, where they took on another Nigerian University, Niger Delta University to emerge the overall first in Africa. It is the first time the University of Calabar Participated in the competition.

It is hoped that with their enthusiasm and level of preparedness, the young stars would win the world finals.

Since 1992, the competition has been organised in five continents regionally : Latin America, Asia Pacific, Europe, North America and Africa.

The competition is annually organised by the International Institute of Space Law (IISL) and the European Centre for Space Law.

The regional winners from Europe, Asia-Pacific, Africa, and North America will then compete in the World Finals which are held in conjunction with the annual International Astronautical Congress.

The World final of the Manfred Lachs Moot Court Competition has the distinction of being judged by three sitting judges of the International Court of Justice.

This is indeed a great feat to the University and Country at Large!