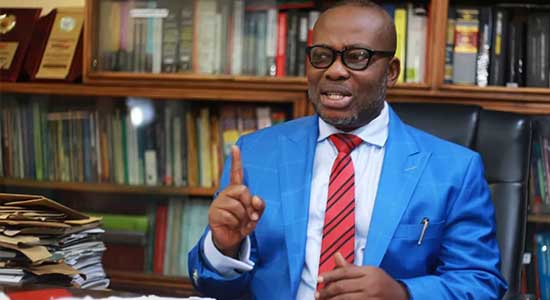 As part of activities to commemorate the day, the former 2nd Vice-President of NBA has empowered over 100 youths in his hometown, Awomukwu in Ikwuano Area of Abia State with seed fund.

Some less privileged persons in Abia and Lagos will also benefit from the empowerment programme which is being financed by his Monday Onyekachi Foundation, MOU.

In the last 10 years, many youths and less privileged in the society have benefited from similarly empowerment program in commemoration of his birthday celebrations.

Ubani often referred to as the ‘Peoples Lawyers,’ have received plethora of local and international awards in recognition of his philanthropic exploits.

He has also received commendation from global human rights organisations for his doggedness and fight against all forms of injustice against the common man in the country.

Earlier in the year, Ubani recorded a major legal milestone when the Federal High Court in Lagos in a ruling on the suit he filed against Nigerian Communications Commission, NCC, extended the time for the registration of NIM by several months after the deadline in December last year.

He also added another feat to his legal conquests few months ago when another Federal High Court in Lagos upheld his suit against Senators and House of Assembly Members in the National Assembly and ordered that their outrageous salaries and allowances be reviewed by the Revenue Mobilisation Allocation and Fiscal Commission, RMAFC.

Expressing gratitude to God for his love and mercies upon his family, Ubani hinted that this year’s celebration of his birthday will be low keyed in reflection of the mood of the country.

Speaking to some journalists in his office, he said: “I am grateful to the Almighty God for his faithfulness upon me and my family. My birthday celebration this year, as usual will be low keyed in reflection of the mood of the nation.

“Secondly, my personality abhors vain glory and unnecessary showmanship so I will prefer to mobilising  little resources to empower the youths in my village in Awomukwu in Ikwuano Area of Abia State to throwing unnecessary party”.

His two children Ebube and Chinwe are July children also, and they are in the same celebration mood with their lovely Dad.