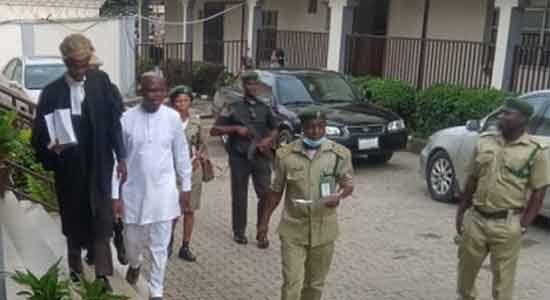 Mrs. Amarachi Eze, the twin sister of the late gospel artist, Osinachi claimed on Tuesday that her sister died from the maltreatment she was allegedly subjected to by her husband, Peter Nwachukwu.

Mrs. Eze said her sister once told their parents that her husband wanted to kill her.

She added that Nwachukwu subjected her late sister to physical attacks, which allegedly contributed to her death.

Mrs. Eze spoke while testifying as the third prosecution witness in Nwachukwu’s trial before the High Court of the Federal Capital Territory (FCT), Wuse Zone 2, Abuja.

Mrs. Exe, who was led in evidence by the prosecuting lawyer, Mrs. Aderonke Imana, said at a point, Osinachi left her matrimonial home to live with her parents to avoid her husband’s maltreatment.

She added over a year later, Nwachukwu returned to beg her to come back, claiming he had changed.

The witness said her late sister used to make money but was allegedly denied free access to it by her husband.

“During their marriage, someone gave N40,000 to my Osinachi but her husband collected the money, beat and called her a prostitute,” the witness said.

Under cross-examination, Mrs, Eze said some of what she said were what she heard from her mother.

The witness said she could not recall when Osinachi and her husband relocated from Enugu to Abuja.

Earlier, the trial judge, Justice Njideka Iheme-Nwosu granted the prosecution’s application for the deceased’s two children (who are below 18 years) to testify in camera.

She also ordered that aside parties in the case and the children’s parents or guidance, members of the public, including the press would be prevented from witnessing the proceedings.

The judge then adjourned till July 15 for the continuation of the trial.