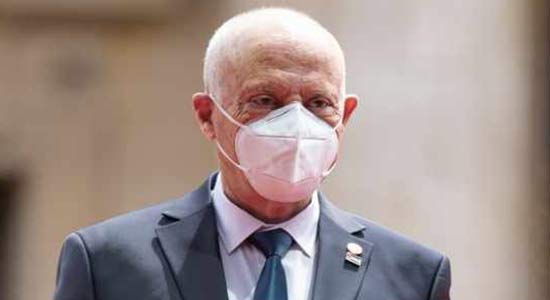 Tunisian President Kais Saied announced Sunday the suspension of parliament and dismissal of Prime Minister Hichem Mechichi following a day of protests against the ruling party, which condemned the move as a “coup d’etat”.

Earlier Sunday, thousands of Tunisians had marched in several cities protesting against the Islamist-inspired Ennahdha party, criticising what they said were government failures in the North African nation and a crippling coronavirus surge.

After Saied announced parliament’s suspension following an emergency meeting at his palace, the sounds of car horns and fireworks filled the streets.

In Tunis, hundreds defied a coronavirus curfew to congregate on the capital’s roads.

“These are courageous decisions — Saied is unblocking Tunisia,” she told AFP. “This is the president we love!”

Since Saied was elected president in 2019, he has been locked in a showdown with Mechichi and parliament speaker Rached Ghannouchi, a rivalry that has blocked ministerial appointments and diverted resources from tackling Tunisia’s many economic and social problems.

“We are navigating the most delicate moments in the history of Tunisia,” Saied said Sunday.

He said the constitution did not allow for the dissolution of parliament but did allow him to suspend it, citing Article 80 which permits it in case of “imminent danger”.

“I have taken the necessary decisions to save Tunisia, the state and the Tunisian people,” he added.

“What Kais Saied is doing is a coup d’etat against the revolution and against the constitution, and the members of Ennahdha and the Tunisian people will defend the revolution,” the party countered in a statement on Facebook.

The premier’s office had not responded to his sacking on Sunday night.

Saied said he would take over executive power “with the help” of a government, whose new chief will be appointed by the president himself.

He also said that parliamentary immunity would be lifted for deputies.

A senior Ennahdha official, speaking to AFP on condition of anonymity, said the protests and subsequent celebrations had been orchestrated by Saied.

“We are also capable of organizing large demonstrations to show the number of Tunisians who are opposed to these decisions,” they said.

Demonstrations were also reported in the towns of Gafsa, Kairouan, Monastir, Sousse and Tozeur.

Several protesters were arrested and a journalist was injured when people hurled stones and police fired tear gas canisters, an AFP reporter said.

“The people want the dissolution of parliament,” the crowd chanted.

After Saied’s announcement, Tunis Farhat, a 49-year-old in Gafsa, told AFP that the president had understood what people wanted.

“He has shown himself to be a true statesman,” he said.

“Our patience has reached its limit, there’s no room for losers. That’s it, game is over!” said 24-year-old Ibrahim, echoing an old slogan from the massive demonstrations which toppled dictator Zine El Abidine Ben Ali’s regime in 2011.

But one man in his forties watched on without enthusiasm.

“These fools are celebrating the birth of a new dictator,” he said.

Despite a decade passing since the 2011 revolution, Tunisia remains prone to political turmoil that has stymied efforts to revive crumbling public services.

The country’s fractious political class has been unable to form lasting, effective governments.

Tunisia has recently been overwhelmed by COVID-19 cases, including more than 18,000 deaths.

Last week, Mechichi fired his health minister over his handling of the pandemic as cases skyrocketed.