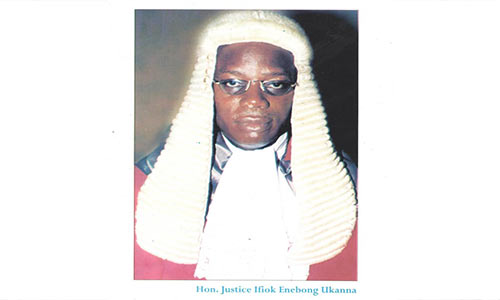 I would like to say so much about this great legal luminary in the person of Hon. Justice Ifiok Enebong Ukanna, but I am short of words, though this will not pose any difficulty to me because writing the tribute of a good, upright and an honest judge is very easy and straight forward without facing the difficulty of scouting for his good deeds to write about.

Hon. Justice Ifiok Enebong Ukanna, son of late Mr. Enebong U. Ukanna and late Mrs. Alice E. Ukanna hails from Mbioto 1, Etinan Local Government Area, Akwa Ibom, State and was born on 28th February, 1955. He attended Christ Apostolic Church Primary School, Oshogbo, Oyo State, FSLC: 1960-1966; Federal Government College, Warri, WASC: 1968 – 1973; University of Nigeria, Nsukka, B.Sc (Hons.) Political Science: 1973 – 1977; University of Calabar, Calabar, LL.B: 1983 – 1986. My lord was called to the Nigerian Bar as a barrister and solicitor of the Supreme Court of Nigeria after the successful completion of his programme at the Nigerian Law School in 1988. In his further quest for legal knowledge, my lord enrolled for a Master of Laws programme at the University of Uyo, Akwa Ibom State which he completed in 2002.

My lord began his professional career as an Administrative Officer from 1978 – 1989 and became a State Counsel from 1989 – 2007 and rose through the ranks to become the Director of Public Prosecution. My lord’s judicial career began on 9th February, 2007 when he was appointed a Judge of the Akwa Ibom State High Court which he is still serving in that capacity until 28th February, 2020 when my lord will finally take a bow from the Akwa Ibom State Judiciary after a meritorious and fulfilling years of service in the bench. Fortunately, the special court session which will be held at the Akwa Ibom State judiciary multipurpose hall, Akwa Ibom State judiciary headquarters, Uyo on 28th February 2020 will coincide with my lord’s 65th birthday in line with the judiciary’s tradition. My lord is a devout Christian and married to Mrs. Emem Ukanna, and the marriage is blessed with five lovely children among whom is Barr. Imaobong Ukanna, an emerging tigress in the legal profession.

My lord is a gentleman to the core, sound, intelligent, disciplined and has a good sense of humour which all these attributes came into play at every court sitting and gave no room for dull moments in my lord’s ever busy court room. My lord’s punctuality to court is second to none, it is a ritual for my lord to consistently sit in court at exactly 9:00am on every court day.

Going down memory lane, I recall appearing in court as a young lawyer before my lord in 2015, my lord in his usual nature of being patient and understanding with lawyers also extended same gesture to me which made me feel important. My lord conducts himself in the performance of his judicial duties with unaffected humility and devotion, and has left a good mark on many lawyers, externs and litigants and I do not exaggerate when I say that my lord is loved by all the lawyers that came across him and also by those that though have not come across him physically but have read his rulings and judgements and saw the enormous energy and industry my lord puts in analyzing every factual and legal issues before arriving at a just and well detailed conclusion. In my lord’s court, justice was not only done but it was also seen to have been done, suffice to say that my lord epitomizes the human face of Justice, what a lovely face it is.

Despite how the independence of mind and thoughts of judges in the determination of matters before the courts in Nigeria is now under severe attack and threats, my lord still stands out as a fearless, brave, strong, optimistic, courageous, determined, daring and an uncompromising judge in the Akwa Ibom State Judiciary. My lord is a jurist, role model, mentor and a law teacher who has presented papers on legal matters at various fora within and outside the shores of Akwa Ibom State.

My lord, though you will take a bow from the bench on 28th February 2020, you can never be forgotten because your legacy of Judicial Scholarship, integrity, impartiality and uncompromising stance will continue to live on in our hearts. This is a short tribute to express how much the Judiciary, members of the Nigerian Bar Association and litigants will miss my lord.

As the saying goes, everything that has a beginning, has an ending. I wish my lord, Hon. Justice Ifiok Enebong Ukanna a glorious retirement filled with fun and happiness in advance.