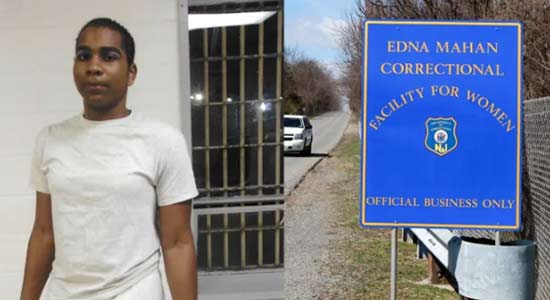 In yet another example of unprecedented problems created by the woke culture in the west, a transwoman had to shifted from a women’s prison in the United States of America because ‘she’ had impregnated two woman lodged in the same jail. The incident happened at Edna Mahan Correctional Facility for Women in New Jersey, where the jail authorities confirmed that the prisoner has been shifted to a prison meant for men.

While the jail authorities didn’t reveal the reason behind shifting a ‘transwoman’ to a men’s jail, the same prisoner had come into limelight earlier this year for making two women pregnant. In April 2022, it was found that two women incarcerated at Edna Mahan Correctional Facility — the state’s only female prison — have become pregnant after having consensual sex with a transgender inmate. The so-called transwoman prisoner is identified as Demi Minor (age 27). The two women ‘she’ bad impregnated are identified as Dimitrius Minor and Latonia Bellamy.

According to a report by the NJ News, Dan Sperrazza, a Department of Corrections spokesman told that Minor was sent to the facility’s most vulnerable section, where ‘she’ is currently the only ‘female’ prisoner on the premises. Sperrazza said he couldn’t comment on the DOC’s particular housing measures in Minor’s case due to privacy restrictions. According to DOC, Minor is serving a 30-year term for manslaughter and will be eligible for release in 2037.

‘She’ and ‘her’ counsel did not give any comment on the issue. However, according to a July 5 post on Minor’s website, DOC authorities forcibly pulled ‘her’ from Edna Mahan and assaulted ‘her’ while taking her to Garden State Youth Correctional Facility. This transfer was done three months after Minor impregnated two women during consensual sexual relationships in the women’s jail. The DOC stated that it cannot comment on the accusations but is investigating things.

In ‘her’ website, ‘she’ admited that she had consensual sex with the two biological female prisoners, and alleged that they were separated after the two women became pregnant. It is notable that consensual sex is not allowed in the Edna Mahan Correctional Facility for Women.

An official statement regarding this read, “New Jersy Department of Corrections (NJDOC) cannot comment on any active investigations. The Department has zero tolerance for abuse, and the safety and security of the incarcerated population and staff are of critical importance.”

DOC spokesperson Dan Sperrazza also told, “The department is currently reviewing the policy for housing transgender incarcerated persons with the intention of implementing minor modifications. The decisions related to an incarcerated person’s housing are made within the parameters of the settlement agreement which requires consideration of gender identity and the health and safety of the individual.”

When Demi Minor was sent to jail, she was a 16-year-old boy who was found guilty of a murder and a carjacking. Demetrius Minor had killed his foster father, 69-year-old Theotis Butts, in July 2011. He had pleaded guilty of the crime, along with a carjacking case in the same year. As a result, he was awarded a 30-year jail sentence. Demetrius Minor started to transition to woman in jail in 2020, and thereafter ‘she’ was transferred from a male prison to Edna Mahan. She also changed her name from Demetrius to Demi to reflect her new assumed gender.

It is notable that while Demi Minor is a transwoman, she was able to impregnate two biological woman. It means that ‘she’ is essentially a man identifying ‘himself’ as a woman but not yet undergone any sex change surgery or treatment. Due to pressure from LGBTQ+ movement, in several countries across the world and in many states in USA, trans-people are allowed to assume a different gender without any physical and medical procedure to change their gender. This has created problems that were not seen earlier. Now man claiming to be woman, without any physical change, can use women’s restrooms, are lodged in women’s prisons in case of conflict with law, etc.

In 2021, New Jersey had adopted a new policy under which it was decided that transgender convicted will be lodged in jails as per their chosen gender identity. Demi Minor was kept in the women’s prison under this policy. However, the state is already having second thoughts about this decision, as the New Jersey Department of Correction said that it intends to review and change the policy. The policy came up for review because it was implemented for only one year starting in June last year. While the nature of the change in the policy is now known yet, unions of prison officers are demanding that only those trans inmates should be allocated jail based on their chosen gender those who have undergone gender reassignment procedures.

This demand has intensified after the Demi Minor episode. William Sullivan, president of New Jersey Policemen’s Benevolent Association Local 105, which represents correctional police, said the union would prefer that transgender prisoners who are housed in women’s facilities should be taking gender transition medication. However, civil liberty groups are insisting on continuance of the current policy, saying that keeping convicts based on their gender at the birth could lead to discrimination, harassment and violence.