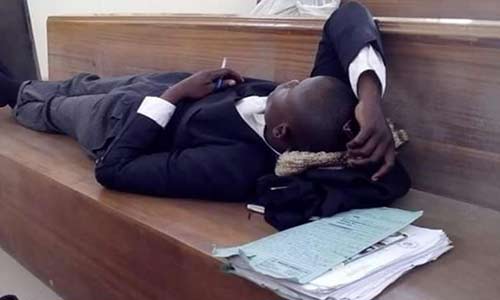 ”Take Notice that this Honourable Court will be moved on the dash day of dash, (year) at the hour of nine (9:00 am) in the forenoon or so soon thereafter”, is part of the statement one must see on any Motion to be moved before the Court.

This is because Regular Courts of the land are expected to sit at 9:00 am, but this has not been the practice by some Courts in the land.

The legal profession is believed to be full of discipline. Rules or practices are what they are and hardly are they compromised; no wonder, the moment members of the Body of Benchers are sitted at any of the three dinners in the Nigerian Law School, no aspirant of the bar is permitted to walk in. He or she will be considered late to the feast and that means a repeat. The rule is, ”Forbid The Bench Sitting Before The Coming-Bar”.

So when a lawyer has been called to the bar, he goes into the Legal Labour Market with high expectations, one of which is that Judges are the best Time-Keepers. This, however, seems not to be the case. Some Judges are not known for arriving early to their chambers not to talk of the Court room.

While some are known to be late to functions, other factors are sometimes said to be responsible for it. It could be that a judgement or ruling which is yet to be delivered; poor health of the judge, traffic, etc, are other prevailing factors that contribute to it.

So it’s understandable when judges do not make it to the hour of 9:00 am or so soon thereafter, but it is not good for the citing, when it is judicially noticed that that is the usual practice of a presiding jurist. It is even worse when the Court do not sit but fails to inform counsels and litigants that are involved of that fact.

Just yesterday, TNL sighted the photo of a legal practitioner who was sleeping on the desk in a Court room close to the dock and bar, with his client sleeping as well while waiting for the judge to arrive. According to the report, they spent four hours travelling from Okoko to Igboosere just to get the wheels of justice moving, but only to find out that the Court did not sit. You see, they were not informed.

The practice of the law is such that some lawyers travel out of jurisdiction to attend to other matters. Time spent on such journeys vary. Some even take the whole day. You can imagine the disappointment and money wasted when one is involved in such a quest. 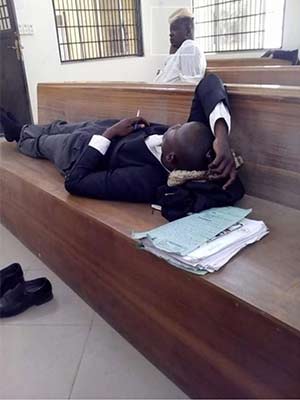 It takes out of the Court, little or nothing to remedy this situation. On the simple direction of judges, Court clerks could put through a phone call to counsels and inform them of the fact that the court won’t be sitting. E-mail or Text messaging is another way to get this working. Other mediums of communication can be used as well. It is a global age for crying out loud. All the parties are expect to be informed earlier of the fact that the Court will not be sitting and that settles it.

In this age of modern technology, issues like this should not be of serious concern. There are other pressing issues that need the judiciary’s concern.

If the legal community is spending time talking about the long walk to Igboosere, it then means that we still have archaic Court Systems with modern legal clothing for mere decoration.