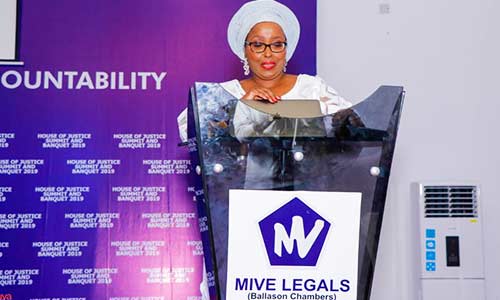 International Human Rights Lawyer, Betty Kaari Murungi Esq, has said that the decline and decay of the nation state and the international system has contributed a great deal to the embedding of impunity.

Betty Kaari Murungi Esq., made this statement while speaking as a Keynote Speaker on “Governance, Impunity And Accountability In A Populist Era”. According to her, what we thought was the liberal triumph seems to have generated new problems: Nationally, Liberalism yielded stronger rights regimes, plural politics, empowered citizens, free media, diffused state power and constitutional opportunities, but the correlate is that it [liberalism], has weakened the state; unleashed seemingly ungovernable identity and grievance politics; and strengthened procedural rather than substantive democracy.

She added that internationally, liberalism has yielded a fortified type of multilateralism and multiculturalism – witness the panoply of international organisations such as the IoM, WTO and the ICC and permitted free flow of labour. But in this era of populism, we are witnessing a rising disbelief in and disregard of this system; anti-immigrant laws and sentiments; decline in cooperation in the international security, among others. Asking whether liberalism has become a victim of its success, she stated that he still believes in liberal ideas of choice, freedom, liberty and rights. However, a time has come when we must inquire into the efficacy of this system and how to upgrade it to deal with the crisis that coincided with its rise.

Speaking further, she noted that the debate on impunity is taking place almost in every country. Not just here in Nigeria.

“The debate on impunity is taking place almost in every country. Not just here in Nigeria. Democratic deficits are deepening and impunity and justice gaps widening everywhere.  Are governments failing because they are not interested in making governments work, or because they have rejected the liberal model and want to hark back to a system that is more familiar?

“Reference morning discussion about the retreat to authoritarianism in Nigeria – anti social media law, shrinking civic space, hate speech law etc. What forces are impacting on leaders and society to generate the outcomes that we see everywhere today? Why is the world sliding back into the Hobbesian state of nature where life was short, nasty and brutish? “, she said.

She also added that it is not in the interest of the executive branch to have an independent judiciary and preserving this independence will require change at deeper level — A change of system; a rethink. A reboot – not just of individuals but ethos, values, systems of governance at national and international level as I have argued earlier.

“We need safeguards against abuse of accountability mechanisms – especially against political interference that results in actual interference with judicial function in deciding cases or questions of law, removing judges irregularly or in excluding certain people from sitting on the bench.

“The role of Civil Society Organisations even in this era of reduced space for organising is critically important. It is organisations such as bar associations and human rights organisations including national Human rights Bodies ] that must act to prevent accountability mechanisms from further abuse for improper purposes/ total dissemination,” she said.

Concluding, she briefly addressed the use of Technology and new media including social media, in electoral in eroding democratic governance, including by diminishing accountability and the authority and independence of the judiciary.

She spoke on freedom of expression and media and the role of social media as an important space- for activism and dialogue.  According to her, this must be resisted vigorously and any attempts to limit freedom of expression / association by legislation or practice must be challenged in the courts.  She noted that in an age of populism however, social media is a double edged sword. Discuss with examples: Manipulation of data by technology companies of election results; use of social media to influence elections – Cambridge Analytica; to humiliate and ‘cancel’ social justice activists, judicial officers and those that seek accountability; and Echo chamber effect that is social media.