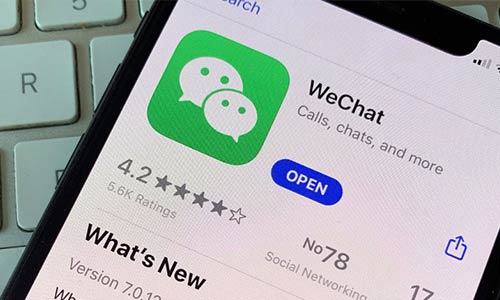 (Reuters) – Tencent’s (0700.HK)WeChat has fixed a glitch that allowed some of its content to be searchable by external search engines, the owner of China’s most popular messaging app said on Friday, raising questions over regulators’ latest attempt to crackdown on the internet sector.

Some of WeChat’s content, including articles on its public accounts page, was briefly searchable in the last few days on Alphabet-owned Google (GOOGL.O) and Microsoft’s (MSFT.O) Bing, but not on China’s dominant search engine Baidu (9888.HK), Reuters checks showed.

The change had prompted speculation that Tencent was heeding a call by Chinese authorities for its tech giants to tear down “walled gardens” in the country’s cyberspace which has come amid a wide ranging crackdown on the sector.

“The loopholes have since been fixed.”

Google, Microsoft, and Baidu did not immediately respond to a request for comment. Google is not available in China.

The ability to find WeChat content on Google and Bing was initially raised by users on developer forums. China’s internet sector has been long dominated by a handful of technology giants who have historically blocked rivals’ links as well as their search crawlers, a practice is often referred to as ‘walled gardens’.

In recent months, this practice has been targeted by Chinese authorities as part of a sweeping regulatory crackdown.

The MIIT has also been studying plans and conducting research to make WeChat content available on external search engines, according to a person with direct knowledge.

MIIT did not immediately respond to requests for comment.

“This should be an important attempt of creating an open internet space, how can you call it a bug,” said one user.