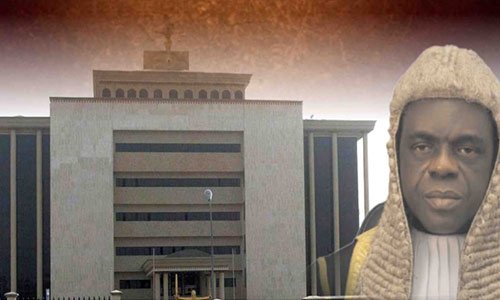 As Justice John Terhemba Tsoho settles into office as the Acting Chief Judge of the Federal High Court, lawyers and other patrons of the court’s services have identified areas that should attract his attention, ERIC IKHILAE reports

The baton of leadership changed hands at the Federal High Court on July 26, 2019, when Chief Justice of Nigeria (CJN) Justice Ibrahim Tanko Muhammad inaugurated Justice John Terhemba Tsoho as the head of the court.

Justice Tsoho, now the court’s 10th Chief Judge (albeit in acting capacity), took over from Justice Adamu Abdu Kafarati, who retired on June 25, on attaining the mandatory retirement age of 65.

Expectedly, attention has shifted to the new helmsman, with many stakeholders looking up to him to address the myriad of challenges plaguing the court.

The challenges include the perennial delay in justice dispensation, the seeming lethargy/lassitude in ICT deployment to court’s operations and systemic corruption and questionable personnel policies, among others.

He attended the Murtala College of Arts, Science and Technology, Makurdi for the Interim Joint Matriculation Board Examination, IJMBE, (1978 -1979) and graduated from the University of Lagos with a Bachelor degree in Law (1980 -1984). He was at the Nigerian Law School in 1985.

Tsoho was appointed a judge of the Federal High Court on November 12, 1998 having served in the Benue State Judiciary in various capacities after a brief stint in private practice in Gboko, from August 1986 to October 1986.

Regarded as the court with the most jurisdiction in the country, issues and disputes on which the Federal High Court has powers are spelt out in Section 251 of the Constitution, in addition to terrorism and pre- and post-election cases.

At inception, the court had five judges including the head judge, who was then referred to as the President. The number of judges rose to 32 with the promulgation of the Federal High Court (amendment) Decree No. 4 of 1990.

Since the number was raised to 100, the court has been unable to engage that number of judges. But, as at today, the court has about 82 judges, some of whom would retire before the year runs out.

Challenges of the FHC

Arguably, delay in justice dispensation remains a major challenge of the court system, with the Federal High Court attracting a greater attention given its broad jurisdictional space, which accounts for the volume of cases it is expected to attend to.

These identified issues, lawyers and other patrons of the Federal High Court say, should attract the attention Justice Tsoho, should he be interested in making an impact.

The way to go

To address delay, stakeholders suggested that the current leadership of the court should begin the process for the recruitment of more judges.

They added that in view of the length of time required for the recruitment process,  a short-term measure should be adopted to ensure that some judges, who are seen to be less productive, should be redeployed to jurisdictions where the volume of cases to be attended to is less.

It has also been suggested that the new leadership in the court should evolve measures to encourage enhanced deployment of technologies in the operations of the court. This, observers argued, will not only reduce the stress judges go through while manually recording proceedings, but also reduce the time spent on cases.

Observers are also of the view that there is the need to evolve ways of addressing corrupt practices within the court system, a development which is blamed for the eroding public confidence in the court’s ability to dispense swift and ‘untainted’ justice.

CJN Muhammad was the first to set agenda for Tsoho while administering the oath of office on him.

He advised the FHC Acting CJ to sustain the tempo of activities and work more to improve on what he was inheriting.

In terms of appointment, Justice Muhammad advised Justice Tsoho to go for the best, because “we always want the best and the best for the Judiciary.”

Justice Muhammad also advised Justice Tsoho not to limit his physical presence to the court’s headquarters in Abuja, but to always visit other divisions across the country to enable him have a first-hand knowledge of what the problems are in those divisions.

He said: “Do not just sit down and be a hearsay person, visit all divisions of your court to know their challenges and think of solutions to the problems. More grease to your elbow and I wish you success and God guidance.”

The preponderance of opinion is that effort should be directed at speeding up the pace of justice dispensation, by ensuring efficient utilisation of time by judges through effective case management skills.

In a recent presentation, a Senior Advocate of Nigeria (SAN), Femi Falana, stressed the need for courts to adopt case management systems to address delay in the face of growing volume of cases.

Falana said with the increasing patronage of courts by the citizenry, courts should device case management systems to enable them cope effectively.

An approach to case management, he said, requires the court to merge cases on similar issues and of similar facts, and then decide one, while the other will abide by the decision of the court on the decided case.

He added that with the growing number of cases, particularly at the Federal High Court, “the National Judicial Council (NJC) needs to ensure that we have a full complement of the court all the time with regard to the increasing volume of cases in that court. But on the part of the leadership of the court, there is an urgent need for case management.”

Falana argued that if the FHC Chief Judge conducts monthly visits to all federal detention centres as provided by the Administration of Criminal Justice Act (ACJA), there would be no need for many detention cases pending before courts.

He contended that since the elite form the bulk of users of court services, they could lose hope in the system, which accounts for why the Federal High Court may wish to learn from Lagos State, where a number of cases are settled at the pre-trial stage.

Falana’s position was supported by many other stakeholders, who urged the Justice Tsoho to promote the court’s Alternative Dispute Resolution (ADR) mechanism, which is one of the last projects inaugurated by Justice Kafarati.

Justice Kafarati, while inaugurating the ADR Centre in Abuja on July 5, 2019, was optimistic that the centre would help to reduce the large case volume and aid the overall administration of justice.

“The centre will no doubt help to determine cases with arbitration clauses in their agreements which were not explored before parties rushed to court,” he added.

Although the court had, before now, employed stenographers who are deployed to most courts, most judges of the Federal High Court still record proceedings manually.

Incidentally, while most of the courtrooms, particularly at the headquarters, are fitted with computers and large electronic screens, court records are still kept manually.

“Why will a judge still be allowed to engage in manual recording of proceedings in this time and age? The court should make it compulsory for every judge to ensure that court proceedings are recorded electronically to save time’’

What to do with ‘lazy’ FHC judges

According to Kafarati, some FHC judges are “lazy”. He advised that “the new head of the court should also look at the issue of lazy judges. Some of the judges are lazy and devote time to issues other than the administration of justice.

“Judges should be committed to the job. Those who are seen to be lazy should be redeployed to other jurisdictions where the volume of cases is low.

A Senior Advocate, who spoke in confidence, said: “The deployment of technology should not be limited to recording systems; it should be extended to taking evidence. I am convinced that cases will be handled and disposed off  faster and efficiently with the use of technology,”

Another lawyer, Dr. Steven Yusuf, was of the view that it would amount to merely stating the obvious when “one begins to set agenda for heads of institutions in Nigeria. This is because, they know what to do, but will hardly see the need to do the right thing because of self  interest.

“While I congratulate him and pray that he be made a substantive head of the court, I will only advise him to pay attention to the endemic corruption within the court system. He should also ensure continuous training for staff and judicial officers of the court.

“These, to me, are the key steps to ensure that the court functions efficiently under his watch. We wish him well.”