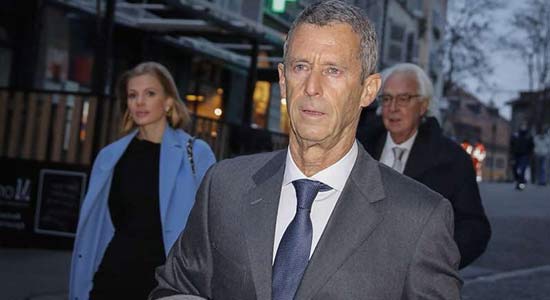 (Reuters) – In a landmark verdict in one of the mining world’s most high profile legal cases, a Swiss criminal court found Israeli businessman Beny Steinmetz guilty of corruption and forgery on Friday and sentenced him to five years in jail with a sizeable fine.

The ruling after a two-week trial is a blow for Steinmetz, a diamond trader, whose pursuit of the world’s richest uptapped deposits of iron ore put him at the centre of a battle that has triggered probes and litigation around the world.

Steinmetz said he would appeal the verdict, which also included a 50 million Swiss francs ($56.48 million) fine.

“It is a big injustice,” he told reporters in the courtyard of the Geneva courthouse.

Steinmetz and two others were variously accused of paying or arranging payment of $10 million in bribes between 2006 and 2010 to Mamadie Toure, whom prosecutors say was one of the wives of the former president Lansana Conte, to obtain exploration permits for iron ore buried beneath the remote Simandou mountains of Guinea and of forging documents to cover it up through a web of shell companies and bank accounts.

Toure, who lives in Florida, could not be reached for comment.

All three defendants denied the charges.

Presiding judge Alexandra Banna said Steinmetz and his co-defendants had used fake accounts and attempted to have incriminating documents destroyed to hide their criminal behaviour.

Banna said that Steinmetz had made an immediate profit from the rights to mine and not a cent went to the West African nation of Guinea.

No one from the government in Guinea was immediately available to comment.

Steinmetz, 64, a former Geneva resident who moved back to Israel in 2016, has in the past been ranked as a billionaire and one of Israel’s wealthiest men. Asked by the court to estimate his personal fortune, he said it was $50-80 million.

Central to Steinmetz’s defence was his claim that he was not involved in the day-to-day running of Beny Steinmetz Group Resources (BSGR). He described himself as the owner and company ambassador but not the boss of the group that employs some 100,000.

In a stinging rebuke, Banna said Steinmetz’s defence thesis of “name dropping” did not stand up.

“He is the effective head of the group,” she said.

Steinmetz’s co-defendants, a French man and a Belgian woman, were also found guilty of corruption and were given a 3-1/2 year jail sentence and a two-year suspended sentence, plus fines of 5 million Swiss francs and 50,000 Swiss francs, respectively.

Jean-Marc Carnice, a lawyer for the French man, said his client was going to appeal.

The lawyer for the Belgian woman could not be reached for comment.

They have 10 days to lodge an appeal.

In a statement, Steinmetz said the judgment went “completely against the course of international justice”.

“I remain totally combative and confident, justice will establish the truth,” he said.

“If we are not welcomed before Geneva’s criminal appeals court, we will go to the Federal Tribunal,” he said, referring to Switzerland’s highest court, based in Lausanne.

Several representatives of the mining industry and non-governmental organisations said the verdict could have repercussions.

“If upheld on appeal, this verdict will have far-reaching implications for the mining industry the world over,” said Bernhard Maier, an attorney at Squire Patton Boggs, London, who represents mining companies.

“It demonstrates that in a world of increased transparency and scrutiny, including as a result of technology and the internet, there is also increased accountability.”

Public Eye, a Swiss corporate governance watchdog whose representatives attended the trial, said in a statement the conviction sends “a strong signal to the entire commodities sector”.

“It also shows the importance for Switzerland to finally close the legislative gaps that facilitate such criminal activity,” it said.