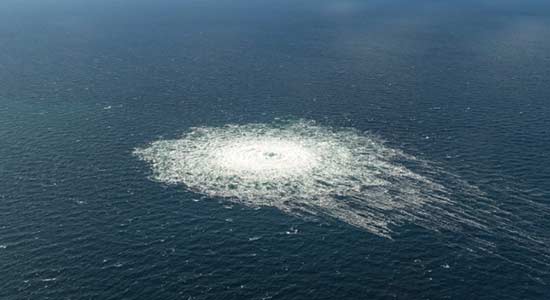 Explosions under the Baltic Sea and the rupture of major natural gas pipelines from Russia to Germany appeared to be a deliberate attack, officials across Europe said on Tuesday, deepening uncertainty about European energy security amid soaring prices and fears of running short of fuel over the winter.

Three separate leaks erupted from the Nord Stream 1 and 2 pipelines, which were already caught up in the conflict over Russia’s invasion of Ukraine, sending swirling streams of methane to the surface of waters off Denmark and Sweden. Top Polish and Ukrainian leaders blamed Moscow, while Russian state media suggested U.S. or Ukrainian involvement.

“It’s hard to imagine that it’s accidental,” Denmark’s prime minister, Mette Frederiksen, told reporters while on a trip to Poland to open a new undersea pipeline that will carry Norwegian gas — a judgment echoed by officials in several countries.

On Tuesday evening, Jake Sullivan, President Biden’s national security adviser, called the incident “apparent sabotage” in a tweet, only hours after the White House press secretary had declined to say whether the United States thought the pressure loss was deliberate or accidental.

Mr. Sullivan wrote that he spoke to his “counterpart Jean-Charles Ellermann-Kingombe of Denmark about the apparent sabotage of Nord Stream pipelines.”

“The U.S. is supporting efforts to investigate and we will continue our work to safeguard Europe’s energy security,” he wrote.

Swedish seismologists reported detecting the underwater explosions on Monday, and pipeline monitors registered a swift drop in the conduits’ pressure. Later, patches of sea surface in the same areas as the explosions began roiling with dangerously combustible gas, forcing shipping to steer clear. Several countries said they were investigating the cause.

The apparent attack had no immediate effect on European energy supplies; Nord Stream 2 has never gone into service, and Nord Stream 1 has been shut down since August. But it raises the stakes — and European jitters — in a simmering energy war between Russia and the West prompted by the invasion of Ukraine. Repairs could take up to several months, experts say, beginning with detailed inspections of the damage before any work could begin.

No matter who is to blame, the leaks hammered home the message that Europe and its energy infrastructure are vulnerable, even if Europe succeeds in its mission of weaning itself from Russian energy.

The Central Intelligence Agency delivered a vague warning in June to several European nations, including Germany, that the Nord Stream pipelines could be attacked, according to several senior U.S. officials familiar with the intelligence. They declined to say whether that warning identified Russia as a possible attacker, and said they had reached no conclusion about who was responsible for the incidents on Monday.

The C.I.A. warning was first reported on Tuesday by the German publication Der Spiegel. The agency declined to comment.

Military and security experts have warned for years of the danger posed by so-called hybrid warfare, meaning the ability to undermine democratic functions, disrupt normal life and sow chaos and uncertainty. The Nord Stream leaks made evident how exposed vital systems can be to outside attacks, said Julian Pawlak, a researcher at the German Institute for Defense and Strategic Studies.

“The most important message that somebody wants to send, is what one is capable of doing with an offline pipeline can also be done with active pipelines, or undersea cables, or other infrastructure,” Mr. Pawlak said.

In response, Denmark and Norway announced increased security around their energy infrastructure, and Norway, now Europe’s most important producer of gas and oil, called for “increased vigilance by all operators and vessel owners.” In a statement, Norway’s energy minister, Terje Aasland, cited “reports of increased drone activity” around its coast, and said that much of what he had learned of the Nord Stream incidents “indicates acts of sabotage.”

Poland’s prime minister, Mateusz Morawiecki, speaking at the opening of the Baltic Pipe project, which connects Poland to Norway through Denmark, blamed Russia for targeting the pipelines, saying the leaks were an attempt to further destabilize Europe’s energy security.

“We do not know the details of what happened yet, but we can clearly see that it is an act of sabotage,” Mr. Morawiecki said. “An act that probably marks the next stage in the escalation of this situation in Ukraine.”

The Kremlin-controlled RIA Novosti news agency noted that the United States “is an active opponent of Russian gas supplies” and has stepped up sales to Europe to help make up for the drop from Russia.

In Washington, Karine Jean-Pierre, the White House press secretary, and Secretary of State Antony J. Blinken declined to speculate about what had caused the leaks, but pledged that the United States would support Europe in securing its energy supply.

“This just drives home the importance of our efforts to work together to get alternative gas supplies to Europe and to support efforts to reduce gas consumption and to accelerate true energy independence by moving to a clean energy economy,” Ms. Jean-Pierre said.

Before Moscow sent troops into Ukraine in February, Russia provided more than half of all natural gas imported by Germany and more than 40 percent used across the European Union, which relied heavily on it to heat homes, generate electricity and run factories. Days before the war began, Germany refused to let the just-completed Nord Stream 2 begin pumping gas from Siberia, and the European Union joined the United States in imposing stiff economic sanctions on Russia.

Moscow then began diminishing its supplies through existing lines, first choking off flows through overland pipelines, as President Vladimir V. Putin appeared to calculate that Russia could absorb the resulting economic pain longer than Europe could. Over the summer, Nord Stream 1 operated at a fraction of its capacity, and the flow halted in late August. The escalation has sent the price of gas soaring and forced leaders to call on businesses and citizens to reduce consumption or face rationing in the winter.

Reflecting the market’s sensitivity to threats, perceived or real, natural gas prices in Europe spiked on news of the leaks, with the benchmark Dutch contract jumping almost 20 percent on Tuesday to 208 euros ($199) per megawatt-hour, compared with about €39 a year earlier. Gas prices, which have been volatile since the war began, peaked at nearly €350 in August but had been falling in recent weeks.

“This has all the hallmarks of a ‘burning down the house’ energy warfare strategy,” Helima Croft, head of commodities at RBC Capital Markets, said of the likely attacks. “Russia was never going to let the West have an easy energy detox, but these acts of sabotage portend a new dangerous, asymmetric phase in the Kremlin campaign to raise the economic stakes for its adversaries.”

The 27 European Union member countries agreed in July to cut natural gas use by 15 percent through the spring, and have arranged alternative supplies, allowing them to build up their stockpiles. The governments in Denmark and Germany both said on Tuesday that the leaks would not affect natural gas supplies in their countries.

It would be no simple matter to inflict damage on both of the Nord Streams, each of which is actually two pipelines. Lying more than 300 feet below the surface in places, the steel pipes are coated in concrete, designed to withstand the pressures at such depths, as well as changes in internal pressure on the 760-mile journey from Russia to Germany. They were subject to numerous stress tests and certification before being laid on the sea floor.

Swedish scientists said on Tuesday they had recorded two separate large underwater explosions, several hours apart on Monday, near the Danish island of Bornholm, that registered 1.8 and 2.3 on the magnitude scale used to measure earthquakes. They resembled explosions carried out by the Swedish Navy, said Björn Lund, associate professor of seismology at the Swedish National Seismic Network.

“It’s very clear that these were not earthquakes,” Mr. Lund said in a phone interview on Tuesday.

Operators of each of the two systems, independently of each other, soon after reported drops in pressure within the pipelines.

Footage released by the Danish Defense command showed a swirl of bubbling gas roughly half a mile in diameter on the surface of the Baltic Sea. Methane, the main component of natural gas, partly dissolves in water and is not toxic, but contributes to global warming.

The pipelines have long been a focal point of broader tensions between Russia and Europe. Ukrainian officials had criticized Germany for moving forward with the Nord Stream projects, which deepened European reliance on Russian gas. The Baltic Sea pipelines could also allow Moscow to stop using Soviet-era pipelines that cross Ukraine — and stop paying the related fees to Kyiv.

After Germany halted certification of Nord Stream 2, Mr. Biden imposed sanctions on the Russian-owned operator of the pipeline — a move some members of Congress had long sought — and the company has struggled to avoid bankruptcy.

Mr. Pawlak of the German Institute for Defense and Strategic Studies said the pipeline leaks would, at a minimum, make Europeans more aware of the need to secure such critical infrastructure.

“The security and military services were always aware, but it is another thing entirely to bring awareness into every political circle,” he said. “The significance of this should be to show how important it is to secure offshore energy assets.”