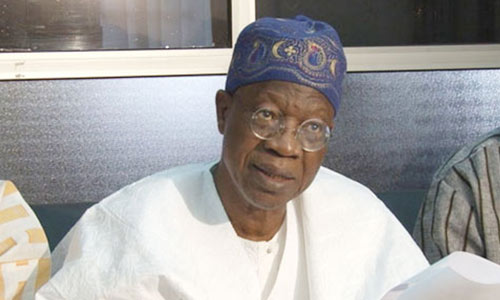 *Says US, UK, EU, others are hypocrites

Minister of Information and Culture, Alhaji Lai Mohamed said Twitter is showing little enthusiasm toward the dialogue it initiated to resolve issues leading to suspension of its operations.

The Minister said this on Friday when he featured on Nigerian Television Authority (NTA) programme “Good Morning Nigeria’’ monitored by the News Agency of Nigeria (NAN) in Abuja.

“I think there is a tepid approach by Twitter.

“I say tepid because on Wednesday, I got a call from one of the foreign missions that Twitter is ready to have serious discussion with high level members of government on this issue.

“But since then, mum has been the word and that is why I said tepid.

“As of today, I do not see twitter as being sincere in its approach to resolve the issue,’’ he said.

The Minister reiterated the position operations of twitter were suspended indefinitely because the platform was being used to promote the views of those who want the country to be divided.

He said the action taken by the government was neither because Twitter deleted President Muhammadu Buhari’s message nor it chose Ghana above Nigeria as a preferred location for its regional headquarters.

“Whether they are in Ghana or in Nigeria or anywhere else, if they allow their platform to be used to destabilise Nigeria, we will do the same.

“Of what importance will the investment be to us if they destroy our country?’’ he said.

For the many youths who said their livelihood depended on twitter, the Minister said, there must be a country for them to earn a living.

He said if twitter was allowed to plunge the country into war with its activities, every Nigerian, including the youth would pay dearly for it.

Mohammed, who described the foreign countries as hypocrites, said their views were purely based on economic reasons and not because they loved Nigeria.

Mohammed said both the EU and the UK were already working on social media regulations and wondered why Nigeria was being accused of stifling free speech.

He added, “The EU has recommended the same thing and Britain only on Wednesday spoke about a law that would regulate the social media. This is why I say they are being hypocritical. Like I said, I don’t like commenting on issues that have to do with relations with Nigeria and other countries but clearly speaking, they are being less than honest.”

Mohammed said the Federal Government had constantly reached out to Twitter to bring down divisive comments like those of separatist leader, Nnamdi Kanu, who was fond of calling Nigeria a zoo.

The minister, however, said the social media platform never responded.

He asked Nigerians not to be deceived by foreign missions condemning the suspension of Twitter.

Mohammed added, “We have seen so many foreign missions come up to condemn the action of Nigeria. Nigerians, please, make a distinction between countries that are trying to protect their economic and commercial interests from those countries that genuinely love you and talking about freedom of speech and don’t forget for one minute that it is because there is a country called Nigeria that there is freedom of speech.”

The minister maintained that the Federal Government did not suspend Twitter because it deleted a tweet by the President, Major General Muhammadu Buhari (retd.), which many found repugnant.

On the issue of Nigerians losing money to the Twitter suspension, Mohammed downplayed the complaints, saying that the Nigerian government was not generating any money in tax from the social media platform.

He said Nigerians must note that it is only when there is peace that business can take place.