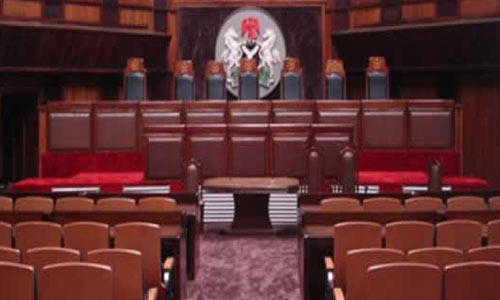 The Supreme Court on Thursday fixed May 24 to deliver judgment in 2019 election appeals that emanated from Zamfara and Ekiti States.

The apex court fixed the date after taking arguments from lawyers involved in two separate appeals on the Zamfara State All Progressives Congress (APC) primary election conducted last year for the nomination of candidates into various positions in the last general election and that of Ekiti in the last State governorship election.

Acting Chief Justice of Nigeria, Justice Tanko Muhammad, announced the dates following passionate appeal that the court considers the judgment before May 29, so as not to create constitutional crisis in Zamfara.

In the Zamfara main appeal filed by Sanusi Liman Dan Alhaji, his counsel, Lateef Fagbemi SAN, pleaded with the five man panel of the Supreme Court to allow the appeal and restore the judgment of the Zamfara High Court which allowed APC to field candidates in the 2019 general election.

Fagbemi specifically canvassed that the judgment of the Court of Appeal, Sokoto Division, which prohibited APC from nominating candidate for the general election on the grounds that the party did not conduct lawful primary should be set aside because the judgment was a miscarriage of justice.

However, Mike Ozekhome SAN, who stood for Senator Kabiru Marafa and other respondents urged the court to dismiss the appeal and affirm the Appeal Court judgment which held that the APC in Zamfara State did not conduct primary election that can qualify it to nominate candidate for the last general election.

The position of Ozekhome was adopted by the Independent National Electoral Commission (INEC) through its counsel, Tanimu Inuwa SAN, who told the court to dismiss the appeal for lacking in merit.

Tanimu, argued that the Court of Appeal in Sokoto was right in stopping APC from fielding candidates for the 2019 general election in Zamfara because the party failed to conduct any primary election known to law.

And therefore urged the apex court to dismiss the appeal.

In a related development, Justice Muhammad fixed May 24 for judgment delivery in the appeal that emanated in the conduct of the last gubernatorial election in Ekiti State.

Appellant in the appeal, the Peoples Democratic Party (PDP) had urged the Supreme Court to reversed the decision of the Ekiti State Governorship Election Petition Tribunal and that of the Court of Appeal, which both held that the appellant the appellant failed to establish riggings and malpractices in the election that produced the current Governor, Kayode Fayemi.

The PDP insisted that contrary to the decision of the tribunal and the Court of Appeal, all documents front loaded at the tribunal were demonstrated as allowed by law and not dumped on the tribunal as erroneously held by the two lower.