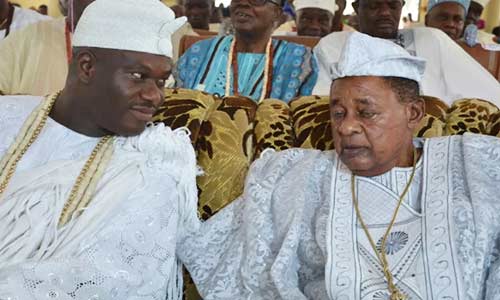 First of all I am immensely grateful to the two most prominent royal fathers Alaafin of Oyo, Oba Lamide Adeyemi III and Ooni of Ife, Oba Ogunwusi for their display of maturity and bringing together the whole Yoruba race again. I say to both revered fathers, KABIYEESI O!!! (As usual, with my chest flat on the floor). Both of them are great kings of Yoruba land and none should ever be disparaged!.

That being said, we need to clear the air on this superiority issue being bandied around by a lot of people without the sense of history. Some say The Alaafin is the supreme-most king in Yoruba land, while others say it is the Ooni. I would try to give an abridged version of the history of the two and let you, the YoruByte reader make your own decision.

So, it is an agreed fact that the progenitor of the Yoruba race is Oduduwa. Fact undisputed! It also known that Oduduwa had only one child, Okanbi. Fact Unchallenged! Furthermore, It is universally agreed that Okanbi had seven children, Fact Uncontroverted! 5 boys and 2 girls. His first-born was a princess who married his chief priest (the Onirisa) and the first male child of that union became the Olowu of Owu. The second child was also a princess, who became the mother of the Alaketu, the progenitor of the Ketu people (how these two boys [Olowu and Alaketu] who were children of princesses became kings is a story for another time). The third, a prince, became king of the Benin people. The fourth, Orangun, became the king of Ila. The fifth, the Onisabe (king of the Sabes [In Benin republic]). The sixth, Olupopo (king of the popos [Also in Benin Republic]). And the last prince was Oranmiyan. All these princes became Kings who wore crowns as distinguished from vassals who did not dare wear crowns but used coronets called Akoro.

Infact, the benin people have their own arguments too with Oranmiyan but that is a story for another day. As you would have noticed from the geanealogy, the first of the Okanbi princes is the King of Benin and people have wondered why he is not said to be the most important Yoruba king. The issue is that, it is the first prince born AFTER ascension to the throne that is the crowned prince, irrespective of the existence of an elder brother.

Oranmiyan was the only son born after Okanbi ascended the throne, therefore, Oranmiyan became the crowned prince. None of his brothers contested this with him. Oranmiyan was a hunter/warrior, so he was given to expedition. After he became king in Ife (please note that up till Oranmiyan, no ife king used the title Ooni), Oranmiyan decided to expand his territories and so he set forth with some of his men to “enlarge his coast”.

From the days of Oduduwa, the king always had a chief priest who performs the daily worship of the gods of Yoruba land, the title of the priest was Oonirisa (a compressed form of Olorisha) which means the custodian of the gods. The chief priest was never from the royal family! They never had any royal blood in them. Just like in the Bible where you have the kings and the priests. (This lends credence to the fact that the yorubas must have migrated from Egypt and not Mecca. Again, this is a story for another day).

Up till this very day, ALL the gods in Ife must be worshipped DAILY, so Oranmiyan, during his days, was not going to risk the gods not being worshipped because he wanted to go expand his coast. As a matter of fact, he required the assistance of the gods to make his mission successful. In view of this, he didn’t go on his sojourn with the chief priest, he left him at home to worship the gods and be the one to give guidance to the populace he left in Ife. Oranmiyan went ahead to establish the great Oyo empire from the bank of river Niger all the way to the tip of Popo town in the now Benin Republic. The Ooni was left as the leader of the Ife people by Oranmiyan, while Oranmiyan himself remained as Alaafin of Oyo empire. Whenever the Ooni required direction on crucial matters of state, he sent messages to the Alaafin who gave INSTRUCTIONS on what to be done. As time went on, the sons of the chief priests (Oonis) started taking leadership after the demise of their fathers and they also started being kings, but they all deferred to the Alaafins in Oyo from generation to generation. As a matter of fact, there was NEVER any Ooni who challenged the authority or the superiority of the Alaafin before the immediate past Ooni, Oba Sijuade who recently ascended to the realm of the spirits. But always, the Alaafins give special recognition to two kings. One, anyone who is an Ooni, because he sits on the stool sat on by Oduduwa. Secondly, anyone who is an Oba of Benin, because he is the eldest brother. But respect and recognition does not mean we don’t know who actually owns the authority.

The prominence of the kings who are Oduduwa’s grandsons come into perspective when you hear of the story of the current Oba of benin’s visit to the Ooni. When the Oba of benin visited the OOni Sijuade and the Ooni welcomed the Oba of benin by saying “welcome my son”, the Oba of Benin, Oba Omo N’oba, gave the response to Ooni Sijuade by saying “The father can’t be the son” and they both laughed about it. But the Oba of benin indeed passed a message there.

I would like to close by giving two analogie:-.

If I am the Only son of my father, and my father marries a wife after the demise of my mother, In African culture, if my father dies, who has the authority to control the home and decide how the inheritance would be shared, Me or my father’s wife? But one thing is certain, no matter what a heir does, he still has to always give respect to his father’s widow. This does not mean the widow would not know who has the ultimate authority.

Now you know the history, now you can decide who the greater king is.