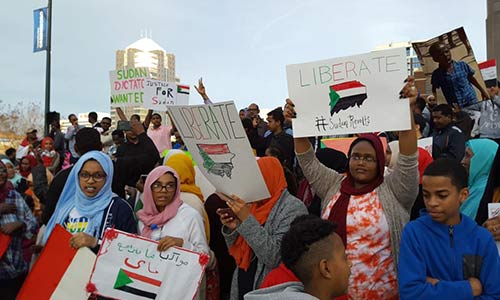 KHARTOUM (Reuters) – Sudan’s main protest group called on Monday for civil disobedience and a general strike as meetings with the country’s military rulers failed to provide any breakthrough on the formation of a joint civilian-military transitional council.

As tension between the two sides rose, the Sudanese Professionals Association (SPA) said in a statement that the military had tried to break up a sit-in in the capital Khartoum where protesters are demanding a handover to civilian rule.

It called on more civilians to join the sit-in and for protesters to erect barriers to protect themselves. A witness told Reuters that security forces dressed in civilian clothes had tried to remove barricades leading to the sit-in, before withdrawing.

The SPA, which spearheaded months of protests that led to the ouster of former President Omar al-Bashir on April 11, is part of an opposition coalition that has held three meetings since Saturday with the Transitional Military Council (TMC).

The two sides had been due to talk on Monday about the make-up of the proposed body, but the TMC focussed the discussions instead on the future council’s functions and powers, two sources familiar with the discussions said.

The make-up of the proposed council is key because activists have insisted that the body be civilian-led. The TMC has not indicated that it is willing to cede ultimate authority.

The joint council would be the sovereign body overseeing a government of technocrats and a legislative council.

After Bashir’s ouster the TMC announced it would remain in place for two years ahead of elections. The Declaration of Freedom and Change Forces, an umbrella alliance of activists and opposition groups, wants a four-year transition overseen by a civilian-led council with military representation.

Protesters have kept up pressure on the TMC through mass rallies and the sit-in outside the defence ministry compound, which began on April 6.

TMC spokesman Shams El Din Kabbashi described Monday’s meeting as positive and said the two sides had agreed to unblock the Blue Nile Bridge and railways occupied by protesters. But the SPA denied agreeing to open any bridges or railways.

“This is counter to reality and negates any agreement with the military council, and we affirm that we are maintaining our sit-in, and everything that the spokesman said is incorrect” the group said in a statement.

The SPA said it would conduct a general political strike and civil disobedience through the holy month of Ramadan, which starts in early May, and the Eid holidays that follow.

The two sides are due to present their visions for the transitional bodies within 24 hours, the Declaration of Freedom and Change Forces said. A further meeting was planned to discuss the joint council’s composition, according to sources.