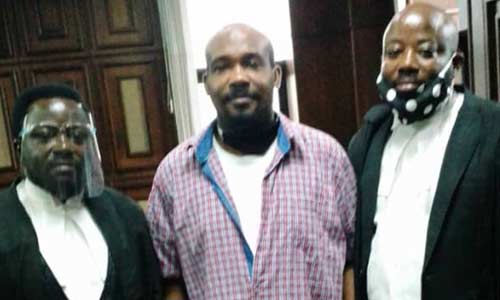 The Department of State Security Services on Tuesday 11th August, 2020 produced in court for the first time an Abia based human rights lawyer, Emperor Ogbonna, who has been in detention since March, 2020.

This was disclosed by Offor Honest on his Twitter handle adding that hearing of Ogbonna’s application for bail was adjourned to 18th of August, 2020

“…For the first time since he was arrested by the DSSS, Emperor Ogbonna was produced in court today. The DSS asked for time to respond to our application for bail and the Judge granted their request and adjourned the matter to August 18.

“The Judge however ordered that Mr Ogbonna be held in Suleja prison pending the bail hearing. A mild drama played out when the DSS insisted that they will keep the accused in custody. Men of the Nigerian correctional service held their ground and after a standoff, they backed down”

Offor laments that at every turn, the DSSS has shown that it has no regard for due process or the rule of law. Even worse, the agency has become a tool in the hand of tyrants. “Nigeria will prevail. Emperor will be free.”

Offor also disclosed that today is the birthday of the lawyer

“Today is Emperor Ogbonna’s birthday. It’s unfortunate that his freedom to personal liberty has been restricted since March 28th. Today, I celebrate him and pray for God’s intervention in this matter.”

Ogbonna was alleged to have posted on his Facebook wall that the Abia State Governor, Ikpeazu, visited a shrine outside the country where he swore to an oath of allegiance and secrecy to former governor of the state. He denied being the originator of the post but that he only reshared it.

The lawyer was granted bail by a Federal High Court sitting at Umuahia, the state capital, on April 29 but rearrested hours later by the DSS