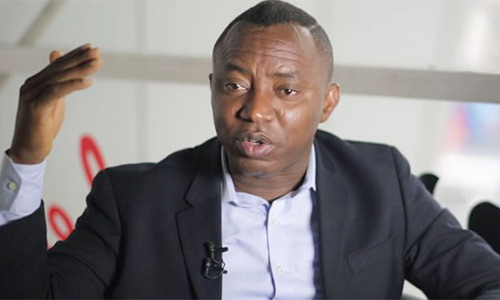 ABUJA – Human Rights Activist and Senior Advocate of Nigeria, SAN, Mr. Femi Falana, on Friday, filed a motion to challenge the legality of the order of the Federal High Court in Abuja that gave the Department of State Service, DSS, permission to detain the convener of the RevolutionNow protest, Omoyele Sowore, for 45 days.

Falana who said he was briefed by Sowore to defend him, contended that the order Justice Taiwo Taiwo granted on the strength of an exparte application that was brought by the DSS, was illegal and unconstitutional.

The senior lawyer maintained that the detention order breached the fundamental right provisions of the 1999 Constitution, as amended.

He specifically applied for, “An order of this honourable court setting aside, discharging and/or vacating the ex parte order of this Honourable Court for the detention of the Respondent/Applicant for a period of 45 days made on the 8th August, 2019, Coram: Taiwo Taiwo J, in Suit No: FHC/ABJ/CS/879/2019 between State Security Service V. Omoyele Sowore”.

Enumerating reasons why the detention order should be quashed, Falana, argued that: “The detention of the respondent/applicant for an initial 4 days period before the grant of the ex-parte order is illegal by virtue of Section 35 of the 1999 Constitution (as amended).

“The applicant/respondent dumped the video evidence in support of its application on the Honourable Court whilst the learned trial judge watched same in his chambers and not in the open court.

“The respondent/applicant was arrested on Saturday 3rd August, 2019 before the planned protest that took place on Monday 5th August, 2019 while he was already under the custody of the Applicant/Respondent.

“The persons who participated in the protests of 5th August, 2019 have been charged with unlawful assembly at the Magistrate Courts at Ebute-Metta, Lagos State and Calabar, Lagos State.

“The applicant/respondent had concluded investigation of this case and announced its findings.

“At the time of the hearing of the motion ex-parte, the respondent/applicant was in custody of the applicant/respondent at Abuja, within the jurisdiction of this Honourable Court.

“The day the motion ex-parte was filed at the registry of this Honorable Court, the respondent/applicant was allowed by the applicant/respondent to consult his Counsel, Mr. Femi Falana, SAN on phone”.

He alleged that the motion ex-parte was predicated on suppression and misrepresentation of material facts, saying it constituted gross abuse of the court process.

“The Applicant/Respondent motion exparte filed 5th August, 2019, did not disclose any fact capable of linking the Respondent /Applicant to any terrorism activity.

“That in the same vein the motion filed 5th August, 2019 did not in the supporting Affidavit allude to facts linking the Respondents/Applicants to any terrorism activity.

“That the Order made on 8th August, 2019 was based on a wrong presumption and mistake that the Complaint against the respondent therein relates to terrorism.

“That by virtue of Section 293 of the Administration of Criminal Justice Act, 2015, an application for the remand of any suspect is to be made before a Magistrate Court.

“By virtue of the actions of the Applicant/Respondent, the Respondents/Applicants right to life, dignity of human person, health and freedom of movement are under threat as same is currently being violated by the Respondent without any justification known to law”, Falana argued.

In a supporting affidavit that was deposed by Marshal Abubakar, Sowore was described as a human rights Activist, blogger and the publisher of Sahara reporters’ news.

“That the Applicant/Respondent had accused the Respondent/Applicant of committing a treasonable act for calling on Nigerians to pour out on the streets on August 5, 2019 to protest against government’s failure to improve the living conditions of Nigerians. Attached hereto and marked Exhibit RN1 is a document confirming the assertion.

“That the protest called by the Respondent/Applicant was scheduled to hold on the 5th August, 2019.

“That the Applicant was however arrested on Saturday 3rd August, 2019.

“That the persons who participated in the peaceful protests of 5th August, 2019 were arrested and charged with unlawful assembly in the Magistrates Court at Ebute Meta, Lagos State Oshogbo in Osun state and Calabar, Cross Rivers State. Attached hereto and marked Exhibit RN2 is a document confirming the assertion.

“That on Wednesday, 7th August, 2019y, the Respondent/Applicant volunteered statement to the Applicant/Respondent.

“That the Applicant however brought an application seeking for an order of court detaining the Respondent/Applicant pending the conclusion of investigation.

“That the Applicant/Respondent had concluded the investigation of this case and had announced its findings. Attached hereto and marked Exhibit RN3 is a document confirming the assertion.

“That the Nigeria Police Force had also concluded investigation of this case and announced its findings. Attached hereto and marked Exhibit RN4 is a document confirming the averment

“That as at the time the motion ex parte was filed, the Respondent/Applicant was already in the custody of the Applicant/Respondent at Abuja within the territorial jurisdiction of this Honourable Court.

“That on the date the motion ex parte was filed at the Registry of this Honourable Court; the Respondent/Applicant was allowed to consult with his counsel; Mr Femi Falana, SAN on the telephone.

“That the Application ex parte for the detention of the Respondent/ Applicant did not disclose their involvement in any terrorism related activity.

“That it will serve the interest of justice if the order for the detention of the Respondent /Applicant is set aside.

“That the investigation of the Respondents/Applicants by Applicant/Respondent is not related to any terrorism activity.

“That I know by virtue of my training as a Legal Practitioner that it is duty- bound on the Applicant/Respondent to present before this Honourable Court facts linking the Respondent/Applicant to evidence of having committed acts of terrorism.

“That this honorable court has the jurisdiction to set aside its own order made pursuant to an ex-parte application.

“That unless this Honorable court intervenes by ordering the Respondent to release the Applicants forthwith and pay them adequate compensation for their illegal detention, the Applicants will continue to languish in the Respondent’s custody without being charged to court”, the deponent added.

It will be recalled that Justice Taiwo had held that DSS which earlier requested for 90 days, was at liberty to return for an extension of the detention order after September 21.