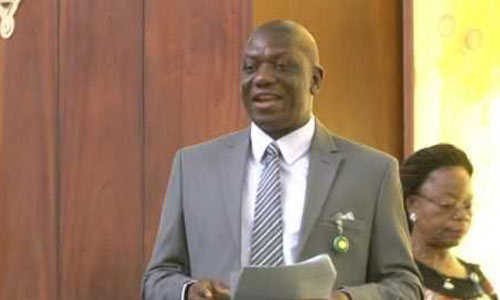 A former House Of Representatives Member, Sunday Marshall Katung, Esq has reacted to the statement of the Presidency regarding the killings in Southern Kaduna.

In a statement made available to TheNigeriaLawyer, Hon. Katung describes the stance of the Presidency as a deliberate attempt to cover up the heinous atrocities meted out to the people of Southern Kaduna. He also describes their position as factually inaccurate and therefore needs to be corrected

“My attention has been drawn to the Presidency’s Press Statement dated 21 July,2020 on the spate of attacks and killings in Southern Kaduna which was signed by Mallam Garba Shehu, a Senior Special Assistant to the President on Media & Publicity.

“The Presidency insinuates that the killings of its citizens, (the people the President swore to protect) by bandits is a “revenge”.One would have ignored this deliberate plan at cover-up of the heinous atrocities meted systematically on Southern Kaduna people but the insensitivity and factual inaccuracies which have been repeated many times, especially at the Presidency level lend themselves to an urgency to put the facts straight and square to avoid a misleading of citizens and the international community moreso as the words of the president are deemed declaratory.”

Hon. Katung said President Buhari has failed to protect citizens whom he swore to protect and has refused to show empathy to them.

“First, the Presidency must accept that it has failed woefully in its primary duty of protection of lives and properties. Sadly, it is also failing to demonstrate empathy as a basic instinct required in the art of governance especially in troubled times.

“The citizens in Southern Kaduna in particular and other parts of the country whose lives have been cut short and who did not have to die deserve the President’s empathy and acknowledgement for gross failing and not an attempt to cover up the atrocities of the killers through the spinning of conspiracy theories or statements that appear to justify criminality. The Presidency’s statement is most unfortunate under a democratic dispensation that should hold and fulfill the promise of how inviolable and sacred human life is .

“The recent past has shown a consistent attempt by official quarters at situating the narrative of the attacks by marauders on defenseless citizens as ‘ethnic’, ‘religious’ and now as ‘reprisals’ without evidential basis. Quite clearly this has trivialized attacks that show a pattern and system that lend themselves to genocidal descriptions.

“It is high time the government deviates from this path and deploy security and justice machineries to arrest and prosecute those behind the killings and insecurity in Southern Kaduna as a measure to enforce civility and to permanently secure the lives of the people.

“The deliberate attempt by the Presidency to cover up the atrocities on the people of Southern Kaduna, is most unfortunate, stands condemned in the strongest terms and must stop forthwith.

“For the Presidency to conclude that “the problem in Southern Kaduna is an evil combination of politically-motivated banditry, revenge killings and mutual violence by criminal gangs acting on ethnic and religious grounds,” suggests that the killers of their citizens are not unknown.

“It is disturbing and unimaginable that despite the “comprehensive security deployments, including the Army, Special Forces of both the Army and the Air Force, surveillance aircrafts by the Air Force and mobile police units that are on the ground on a 24-hour basis to forestall criminality and keep the peace” as alluded to by the Presidency, that these bandits still carry out the killings without the state’s resistance. How would the government explain the killings in Zangon Kataf during a state government imposed 24-hour curfew?

“Garba Shehu and his co-travelers need not be reminded that the first duty of every president is the security and protection of the citizens of the country irrespective of their inclination. It is, indeed, the whole duty of the president. The Presidency must know that one of the indicators of a failed state is the failure of the government to provide security.”

Hon. Katung urges president Buhari to stand up to his responsibility of protecting the citizens and also urged the people of Southern Kaduna to cooperate with security agencies