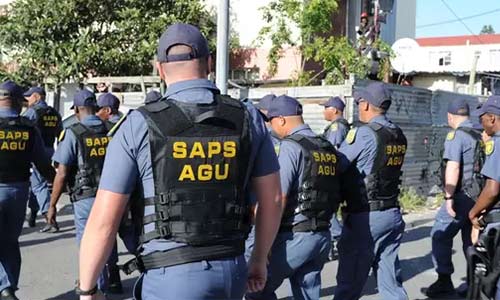 A South African police constable, Mr. Austin Luciano Reynold, who was found guilty of murder of a Nigerian, Mr. Ebuka Okoli, has been sentenced to 30 years in prison.

The court sentenced Reynold three days after he was pronounced guilty of all four charges preferred against him — one charge of murder and three charges of robbery.

Twenty-four-year-old Reynold was accused of killing Okoli, a native of Anambra State, in Durban, a coastal city in Kwa Zulu-Natal province in South Africa, in 2018.

The officer shot Okoli at close range and robbed him during an unauthorised raid on the community where Okoli resided.

The rogue policeman, who shot and killed the Nigerian during a “shakedown” mission at the behest of another alleged drug dealer, was convicted of murder at the Durban High Court on Friday.

Reynold, who was also found guilty of robbing the drug dealer and two other people in January last year, was sentenced yesterday.

Reynold’s accomplice in the raid, Mr. Brinley Pallo, testified against him while giving his testimony before the presiding judge, Justice Shyam Gyanda, on Friday.

Gyanda described Reynold as a “self-confessed liar” who had “intentionally shot and killed” the dealer who Reynold referred to as “Frank.”

Gyanda refuted Reynold’s attempt to pin the blame on Brindley Barlow, a long-time family friend who was present but did not participate in the crimes.

He described Barlow’s testimony as “truthful,” gave him indemnity from prosecution and asked the 21-year-old to now “stay on the right side of the track.”

IOL reported that Reynold had testified last week and said he reconnected with Barlow in November 2017 after being apart for a few years.

He said they got to Frank’s house with the assistance of another alleged drug dealer known as Romeo also from Nigeria, who is also a friend of Barlow.

Barlow had allegedly wanted a fix of cocaine.

Reynold, Barlow, Romeo and another unknown Nigerian national were said to have consumed alcohol outside a nightclub in the CBD before driving to Umbilo.

The two Nigerians were dropped off near Frank’s house. Once inside, Reynold and Barlow consumed cocaine in a back room.
They needed to pay Frank and therefore visited a nearby garage and only Barlow went inside the house when they returned from the garage.

Reynold said he heard Barlow call out for help, and he ran into a room and noticed Frank and another Nigerian male had him pinned.

While he wrestled with Frank, Reynold said Barlow grabbed his firearm and struck the dealer on his head with the cocked weapon.

That triggered the shot that penetrated the back of Frank’s head and exited through his face.

He claimed that Barlow then pointed the gun at him, demanded that he gather the spent cartridge, bullets and the magazine that had fallen and was damaged.

Reacting to the news of the conviction earlier, the Chairman/CEO of Nigerians in Diaspora Commission (NIDCOM), Mrs. Abike Dabiri-Erewa, expressed relief, saying justice had been served.

“We are glad that justice has been done,” she said, adding: “We had always stated that there have to be consequences for actions. We are glad that this case finally came to an end and South Africa has demonstrated the political will to deal with xenophobia.”

She asked Nigerians in South Africa to adhere to President Muhammadu Buhari’s admonition to be on their best behaviour whereever they are.

She also said Nigeria and South Africa would work towards a united Africa and bring to justice perpetrators of violence irrespective of their nationality.