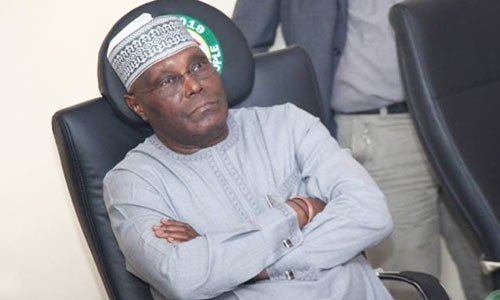 I have pondered on Atiku Abubakar’s case against President Muhammadu Buhari at the presidential election petition tribunal. I have also cerebrated on the counter arguments of the president.

By my ratiocination, the arguments of both parties are nourished with so much ridiculousness that the case itself appeals more as comic relief.

The president underpropped his argument with the claim that Atiku is not a citizen of Nigeria by birth, and that he ‘’ought not to have even been allowed in the first place, to contest the election’’.

Truly, the Nigerian constitution prescribes citizenship by birth as a requisite for the office of the president.

But where did President Buhari get the ‘’genius’’ of his case from? From a man he sent pythons after in Afaraukwu, Umuahia, Abia state.

Months before the election, Nnamdi Kanu, leader of the proscribed Indigenous People of Biafra (IPOB), actuated the controversy about the origins of the PDP presidential candidate.

Kanu claimed Atiku is a citizen of Cameroon and not of Nigeria, having had his place of nativity in a part of Adamawa that was a portion of northern Cameroon until the plebiscite of 1961 which wedded that area of Cameroon with Nigeria.

Atiku was born in Jeda in November 1946 before the matrimony.

Buhari hung his case on this claim, and also argued that votes cast for Atiku were worthless.

In fact, Abba Kyari, chief of staff to the president, who appeared before the tribunal, reinforced this claim.

Let me ask stupidly. Why did the president not hinge his case on the substance of Atiku’s petition, which is the outcome of the February election? Why did he underpin his argument on the claim of a fugitive?

I admit, Atiku’s ‘’citizenship quandary’’ as it relates to the office of the president is a grey area in Nigerian law that the courts will have to interpret to enrich the jurisprudence.

But the bigger issue, I think, is still the substance of his petition. Did Buhari really defeat Atiku in the election?

Atiku also brought on an aspect of ludicrity in his argument with the claim on Buhari’s certificate. I think the president’s ‘’missing certificate’’ slant he propagandised detracted from the meat of his case.

Let me ask stupidly. Besides the sensation of the president being un-certificated, how does the claim buttress his case?

Already, courts of different jurisdictions (high court and appeal court) have dismissed suits filed on this claim. Recently, the supreme court dismissed an appeal seeking the disqualification of Buhari on the grounds that he did not submit his academic credentials to INEC.

In fact, the constitution does not specify ”certificate” as a prerequisite for the office of the president.

Section 131 (d) of the constitution says: A person shall be qualified for election to the office of the president if – he has been ‘’educated’’ up to at least school certificate level or its ‘’equivalent’’.

The ringtone here is ‘’educated’’. Education is beyond the four walls of school. Travelling, attending conferences, seminars, workshops and high-powered meetings as well as managing agencies, departments, companies and businesses are all part of learning and education.

Also, Atiku’s claim that an INEC server, which contained the real figures of the election, put him in the lead, could have been the coup de grace if had a much convincing argument to substantiate it.

The former vice president asked the tribunal to order INEC to grant him access to its server and smart-card reader records. He claimed that from the data in lNEC’s “server’’, the results from state-to-state computation showed that he had a total of 18,356,732 votes to defeat Buhari who had 16,741,430 votes.

But INEC shrieked at the sound of ”server”.

Yunus Usman, INEC counsel, in a counter affidavit, asked the court to reject the application.

“They are asking us to bring something we do not have. My Lord, the commission did not deploy such technology infrastructure in the last general election,’’ he said.

The electoral umpire has been emphatic in its position that there is no server for the 2019 election. But I believe, the witnesses Atiku called did more to pooh-pooh his claim of ‘’server’’ than INEC did.

So, where there are two ridiculous cases; the tad ridiculous will take the day.

Really, I do not think Atiku is coming.