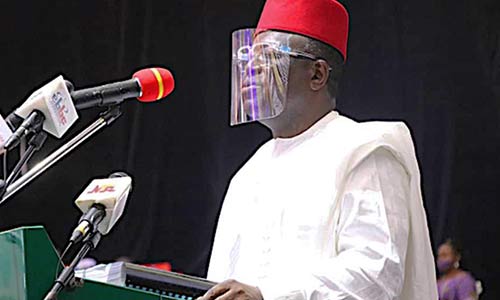 Governor of Ebonyi State, Dave Umahi, has said that the secessionist agitation of the proscribed Indigenous People of Biafra has been hijacked by criminals and kidnappers.

The governor also said that the proscribed group is no longer in control of the whole agitation as a result of the alleged hijack by unscrupulous elements.

Umahi, who is the Chairman of the South-East Governors’ Forum, spoke on Friday on Channels Television’s ‘Sunrise Daily’ breakfast programme.

According to him, the people of the South-East geopolitical zone are industrious people who don’t sit at home on Mondays.

The governor said though IPOB had announced the suspension of its Monday sit-at-home order initially issued by the group, Igbo businessmen and women continue to stay indoors on Mondays because of the lack of inadequate security personnel to secure their lives and property.

Umahi said, “The sit-at-home works to the average of 70 per cent in the South-East because of fear. It’s fear; our people are not the kind of people that sit at home – they hustle for their daily living, they go from one place to the other.

“The worst sit-at-home is the terrible state of roads in the South-East, it is worst than IPOB sit-at-home.

“You can’t destroy your people and pretend that you are fighting for your people. These are youths and then the agitation of IPOB has been hijacked by cultists and criminals and kidnappers, so the whole show is out of their hands.

Recall that IPOB pronounced a weekly sit-at-home order in the entire South-East (Imo, Anambra, Enugu, Ebonyi and Abia states) beginning August 9, 2021, to protest the continued detention of its leader, Nnamdi Kanu, who has been in the custody of the Department of State Services for over three months.

IPOB subsequently suspended the Monday sit-at-home order, saying it would be observed any day Kanu appears in court but the last seven Mondays have turned bloody in the South-East as “unknown gunmen” attacked travellers, traders, students, and other persons who came out for normal activities.

Many have been killed, injured and vehicles have been burnt while banks, markets, schools, and other public places continue to shut down every Monday as people stayed indoors out of fear of being assailed outside.

The case of Kanu, who is facing terrorism-related charged before Justice Binta Nyako, has been adjourned to October 21, 2021, for continuation of hearing.