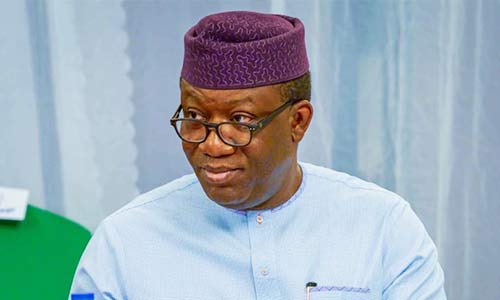 Ekiti State Governor Kayode Fayemi has condemned the violent clash between some Yoruba and Hausa traders in Shasha market, in Ibadan, the Oyo State capital, at the weekend.

The violent clash had reportedly led to the death of some residents, destruction of properties and displacement of people in the area.

Fayemi in a statement signed by his Chief Press Secretary, Yinka Oyebode, on Saturday, called on the warring traders to sheathe their swords and embrace peace.

He sympathised with the government and people of Oyo State, especially families that have lost lives and properties during the violent clash.

He also commended Oyo State Governor, Seyi Makinde, for taking immediate steps in arresting the carnage, including the declaration of curfew.

Governor Fayemi said regardless of the cause of the disagreement that led to the mayhem, a peaceful resolution of the conflict remains the best option.

He urged the Yoruba and Hausa traders in the area and in different parts of the country to see themselves as brothers and partners in progress, adding that disagreements should not always be allowed to degenerate into violence, maiming and killing.

The Chairman, Nigeria Governors’ Forum (NGF), warned that the Shasha crisis, if not curtailed, could ignite pockets of crises in different parts of the country, adding that that could be disastrous for the country.

‘We will enjoy enduring peace and progress through dialogue, mutual respect and understanding for one another. Violence and attendant death and destruction would only spell doom for the country.

‘While commending Governor Makinde for his timely intervention in the crisis, we also express our sympathy to families of the victims as well as those who have lost properties and businesses during the crisis,’ Fayemi added.