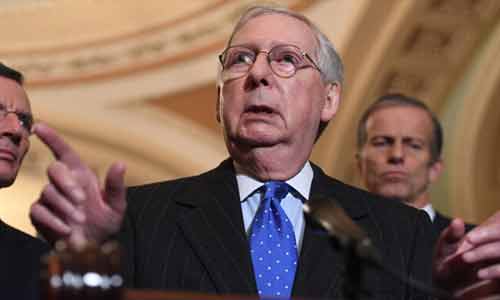 While the House impeached President Donald Trump on Wednesday, the Senate trial likely won’t start until after he leaves office.

The Senate is currently on a recess break and is set to reconvene Tuesday – one day before Joe Biden’s inauguration. Democrats have been hopeful in immediately moving forward on a trial to argue the president is guilty of inciting an insurrection. But they were blocked by Senate Majority Leader Mitch McConnell, who told fellow Republicans on Wednesday that he was undecided whether to vote to convict Trump in the pending trial.

The Kentucky Republican, in a statement after the House impeached Trump, said the Senate trial would not be rushed and concluded, “There is simply no chance that a fair or serious trial could conclude before President-elect Biden is sworn in next week.”

McConnell, who pointed out that previous impeachment trials in the Senate have taken weeks, said that even if the Senate came back into town and started immediately, the proceedings would likely loom over Biden’s first days in office.

Instead, he said, the Senate would take up Trump’s impeachment once they are back in Washington and once the House officially transmits the article to the chamber, which hasn’t been decided.

“Even if the Senate process were to begin this week and move promptly, no final verdict would be reached until after President Trump had left office. This is not a decision I am making; it is a fact,” McConnell said. “In light of this reality, I believe it will best serve our nation if Congress and the executive branch spend the next seven days completely focused on facilitating a safe inauguration and an orderly transfer of power to the incoming Biden Administration.”

Earlier Wednesday, McConnell called Senate Minority Leader Chuck Schumer’s office and indicated he would not call the Senate back for Trump’s trial, according to Doug Andres, a spokesman for McConnell.

While McConnell controls the Senate floor and its schedule, Schumer, D-N.Y., has been floating the possibility of invoking a rarely used emergency provision that would force the Senate back in session if both leaders consented. McConnell’s office told Schumer’s staff he would not consent, Andres added, thus leaving the Senate on a break until Jan. 19 and unable to receive the House’s article of impeachment until then.

“There was legislation passed in 2004 that allows the Senate minority leader and majority leader to jointly reconvene the Senate in times of emergency. This is a time of emergency,” Schumer said at a news conference in New York on Tuesday.

“I’ve asked him to call the Senate back,” Schumer said of McConnell. “We can come back ASAP and vote to convict Donald Trump and get him out of office now before any further damage is done.”

All eyes have been on McConnell since Republicans fractured in their response to Wednesday’s attack at the Capitol, with some directly blaming Trump while others excuse remarks he gave that some say incited the crowd.

While 10 House Republicans voted Wednesday with Democrats to impeach Trump, McConnell has been virtually silent on the calls to hold Trump accountable.

In a letter to fellow Senate Republicans Wednesday, McConnell said he was still weighing the charge lodged against Trump and has “not made a final decision” on whether he will vote to convict the president during his trial.

“While the press has been full of speculation, I have not made a final decision on how I will vote and I intend to listen to the legal arguments when they are presented to the Senate,” McConnell said, according to an excerpt of the letter.

Multiple news outlets, including the New York Times and CNN, reported McConnell was pleased with the House moving forward on impeachment and believes it will help the Republican Party move forward in a post-Trump world.

If the Senate receives the article of impeachment on Tuesday, Senate rules dictate that the chamber would begin proceedings the following day at 1 p.m., meaning the process would begin on Jan. 20 around the same time Biden is inaugurated.

But House Speaker Nancy Pelosi, D-Calif., has not said when the chamber will transmit its article of impeachment to the Senate, leaving it unclear when a trial might begin. On Wednesday, Pelosi told reporters, “I will not be making that announcement right now.”