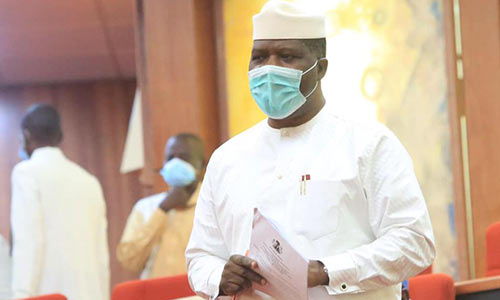 The Senate Committee on Judiciary, Human Rights and Legal Matters has made a request for additional funding of the judiciary in next year budget.

Senator representing Ekiti Central and Chairman of the Committee, Michael Opeyemi Bamidele, presented the request before the Senate Committee on Appropriation, on Thursday, at the National Assembly complex.

Investigation revealed that the executive arm of government made a provision of N100 billion for the judiciary in the 2022 budget.

Speaking with newsmen after his presentation before the Senator Jibrin Barau led Appropriation Committee, Senator Bamidele who disclosed that his Committee made a request for an additional N20billion for the judiciary maintained that the budget estimate was inadequate, considering the enormous responsibilities before the judiciary.

Senator Bamidele said apart from the challenge thrown up by terrorism, there is the need to deploy technology in the dispensation of Justice.

He said: “As we speak, there are people awaiting trial as a result of insecurity: call them gunmen, bandits, terrorists— whatever you call them, the truth is, there is so much additional burden on the judiciary. Of course, there must be a fair hearing for suspects apprehended, and it is an additional responsibility for the judiciary. So, they need more money.

The COVID has also made it imperative to deploy technology for virtual hearing. All of these demand money, we are taking off all levels of Court: from Magistrate to the Supreme Court, aside from the special Court like Arbitration.

“So, both committees in both chambers are asking for more money for the judiciary.” Asked about the secrecy surrounding the budget of the judiciary, the Chairman, Senate Committee on Judiciary, Human Rights and Legal Matters dismissed it as a non-issue as he noted that it was not peculiar to the judiciary.

“It isn’t our responsibility to monitor their expenditure but it is important that whatever is allocated under the National Judicial Commission is judiciously used.

“The secrecy you talked about isn’t peculiar to the judiciary. No one is asking about the budget of the Department of State Serviced or National Intelligence Agency.