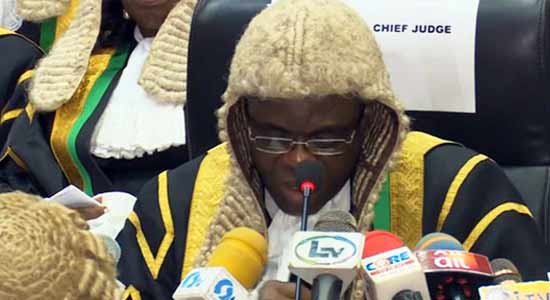 Some of the applicants seeking to become judges in Nigeria have been disqualified based on security reports.

This was disclosed by the Chief Judge of the Federal High Court, John Tsoho, in an exclusive interview with PREMIUM TIMES.

Mr Tsoho said even though some of the applicants might possess the required credentials, they had to be dropped from the appointment process due to adverse security reports.

But due to deaths, retirements, and elevation to the Court of Appeal bench, the number of judges of the court, which was 87 at some point, is currently 72.

This implies that there are 28 vacancies on the court’s bench, but Mr Tsoho said only six will be appointed for now.

He said the appointment process has now reached an advanced stage, saying some applicants have been screened out on account of security reports.

“We are at an advanced stage of the process. As I speak, some security reports have come in and they have automatically disqualified some people (applicants). No matter how qualified you think you are, if your report is adverse or negative, you will be dropped,” Mr Tsoho said.

He, however, did not disclose the number of applicants disqualified as well as their names.

The chief judge said after the security vetting, the next stage of the process is to send the names of screened applicants to the Federal Judicial Service Commission (FJSC).

“So, when we are through with the security vetting, the names will be forwarded to the Federal Judicial Service Commission (FJSC), which will then make a shortlist to the National Judicial Council (NJC) and that is where the final process comes in,” he said.

The NJC will then conduct its own screening and interviews after which the names of the successful candidates will be recommended to President Muhammadu Buhari for appointment.