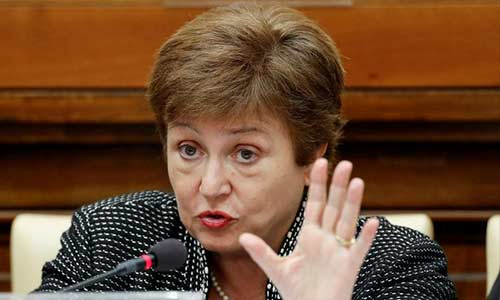 Bulgaria’s Kristalina Georgieva, whose tenure as head of the IMF remained uncertain Monday amid allegations of data tampering, is described as a respected economist with a strong background in international finance.

The 68-year-old took the helm of the Washington-based crisis lender in October 2019 after Christine Lagarde departed to lead the European Central Bank.

Two years later, she has been engulfed in controversy after an investigation concluded that during her tenure at the World Bank, she was among top officials who manipulated data from its closely watched Doing Business report in favor of China.

Georgieva was the only candidate to lead the IMF, which traditionally is led by a European while the World Bank is headed up by an American.

But the institution had to change its bylaws to approve her appointment, since she was over the 65-year age limit.

Until then, she had spent most of her career at the World Bank, even becoming its chief executive in 2017.

A native of Sofia, she taught economics there for 26 years, and built up environmental experience with a focus on agriculture and sustainable development.

Her main priorities at the IMF have been fighting inequality and climate change, as well as better integrating women into the economy.

– ‘Tenacious’ –
When Georgieva took the reins of the International Monetary Fund, the global economy had been weakened by the trade tensions between the United States and China.

No one could imagine the global downturn that occurred a few months later, when the Covid-19 pandemic began, disrupting businesses and daily life worldwide.

Described by her supporters as unimpeachably honest, the allegations against her from an investigation done by an outside law firm have come as a surprise.

Georgieva is “a bold leader in confronting the economic fallout of the pandemic, as well as in positioning the fund as a global pioneer on climate change,” US economist and Nobel laureate Joseph Stiglitz wrote following the release of the investigation’s findings last month.

Other backers have pointed to her campaign to increase the IMF’s reserves to amplify its lending ability to poor countries.

Jeffrey Sachs, director of the Center for Sustainable Development at Columbia University, wrote in the Financial Times that Georgieva risks becoming a victim of “anti-Beijing hysteria,” amid claims by some Washington politicians that China interferes with multilateral institutions.

In addition to her duties at the World Bank and IMF, Georgieva served as European Union commissioner for aid and crisis management from 2010 to 2014, taking over for Bulgaria’s original candidate at short notice.

In 2014, she became European Commission vice-president for budget and human resources.

“She is tenacious and will not give up when fighting for an issue she really cares about,” one Brussels diplomat recalled of her time there.

In 2016, she was a surprise finalist in the election for the post of UN secretary general, which in the end went to Portugal’s Antonio Guterres.

Georgieva was born behind the Iron Curtain in Sofia, capital of communist Bulgaria, on August 13, 1953, the year Soviet leader Joseph Stalin died.

Her father Ivan was a road construction technician and mother Minka worked as a shop manager, ignoring her husband’s advice not to work because of her heart condition.

Georgieva’s mother, who died in 2014 at age 93, told local media that as a child, her daughter was “far too quiet” and always had her nose in a book from the moment she could read.

The married mother of one is fluent in Russian and built good relations with Moscow during her years as the World Bank’s director in the country between 2004 and 2007.