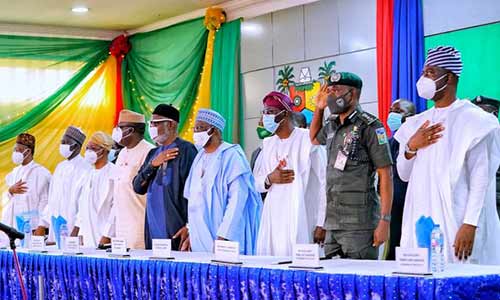 South-west governors, ministers and monarchs yesterday called for a comprehensive review of the nation’s security system and advised that a review and implementation of reports of constitutional conferences, including the 2014 National Conference with respect to security, among other salient issues, would be the correct decision to make.

The leaders at a meeting in Lagos with a presidential delegation led by the Chief of Staff to the President, Prof. Ibrahim Gambari, also canvassed special protection for the region’s economic interests and assets.
In a communiqué issued after the meeting, the leaders said the review of reports of constitutional conferences held in the past would facilitate the implementation of some of the recommendations, especially with reference to security, economy and equal treatment for citizens.

The communiqué, signed by the Chairman of the South-west Governors’ Forum and Ondo State Governor, Mr. Rotimi Akeredolu, and the Ooni of Ife, Oba Adeyeye Ogunwusi, noted that the prolonged closure of the border has caused economic difficulties and should be re-examined to alleviate problems of the people in the border communities and the soaring prices of some essential commodities.

The South-west leaders also urged the federal government to use the existing laws, including the 2015 Cyber Act and those regulations benchmarked from other countries to provide safeguards against the spread of fake news.
They thanked President Muhammadu Buhari and his administration for their responsiveness to the initial demands of the #EndSARS demonstrators and for the firm handling of the aftermath of the protests.

They endorsed the call by traditional rulers for regular consultations with governors and federal authorities on challenges facing the states and for recognition of their role in the constitution.
“The security architecture of the country requires adjustment to adequately address the threats and realities of insecurity in the country,” they said, adding: “There should be more police presence in communities in the South-west states.”

They said while there were legitimate concerns contained in the initial #EndSARS movement, they regretted that the protests were later hijacked by criminals and other elements with ulterior and negative motives, degenerating into anarchy.

The South-west leaders stressed the need for government to be proactive in preventing a repeat of what happened in the country following the demonstrations, adding that security needs to be strengthened in all states.

They said: “We wish to encourage the Nigeria Police by responding to their needs and appeal to them to do more to protect lives and property and enhance security all over the country. We call for specific measures and proposals to repair the damage done to the physical infrastructure and economic assets of the South-west.

“[We call for]review of reports of constitutional conferences, including the 2014 National Conference, and implement some of the recommendations, especially with reference to security, economy, equal treatment for citizens all over the country.

“We believe that the prolonged closure of the border has caused economic difficulties and should be re-examined to alleviate problems of the people in the border communities and prices of some essential commodities.

“There is a need to review the closure and permit resumption of economic and trading activities.”

They called for a programme to address youth employment, urging that empowerment should be prioritised.

The leaders said there should be closer coordination and complementarity between the states and the federal government and asked for a review of the curricular of tertiary institutions with an emphasis on skills acquisition and entrepreneurship.

Saying they recognised the damaging and negative impact of fake/false news and worry about its destructive and dangerous potency of fake news, the leaders, however, called on the federal government to use the instrumentality of existing laws and those regulations benchmarked from other countries to provide safeguards against the spread of fake news.

“We urge that every effort should be made to resolve the impasse between ASUU and the federal government so that students can return to school in earnest,” the leaders said.

In his speech, Gambari said Buhari acknowledged that the country could not afford to ignore the yearnings of its youth population anymore.

According to him, the federal government is adopting a multi-pronged approach to the problem of insecurity, youth unemployment, police reform, improvement in the conditions of serving police personnel and adoption of community policing.

“We have the vice president and the governors working at one level. We also have strengthened the National Human Rights Commission (NHRC) to ensure that we are keeping all the promises we have made in terms of responsibility to the citizens. Mr. President wants to establish unfiltered channels of communications through our natural rulers and the governors so that the voices of the people can be reported and heard by him directly,” he stated.

Others were Director-General, Department of State Services, Mr. Yusuf Bichi, and the Inspector-General of Police, Mr. Mohammed Adamu.

In his speech, Akeredolu said: “We have gone through a lot as a people in the past few weeks. The past experience was most worrisome, though some kind of peace has returned. We want to sustain that peace at all costs.
“We have witnessed what our youths can do. When it started, no governor could walk down the road and say I am among my people. Our people almost turned against us. We have to find a lasting solution to the youth’s unrest.

“The South-west experienced a coordinated attack on our heritage during the #EndSARS campaigns, that is why we have to work out a stronger collaboration between our natural rulers, security agencies and the chief executives of states.”
Other governors at the meeting were Kayode Fayemi (Ekiti), Dapo Abiodun (Ogun), Adegboyega Oyetola (Osun) and Seyi Makinde of (Oyo).

Oba Ogunwusi blamed the governors for seeking the cooperation of natural rulers only during elections.

“If we had this type of meeting frequently, the mayhem we witnessed recently would not have happened,” he stated.

Referring to the unsavoury turbulence in the First Republic, the Ooni said: “The South-west has the reputation of the ‘Wild, Wild West.’ It is not a good reputation. But if our governors are not far from us, we will be able to articulate views and opinions that will nip such ugly things in the bud.”

He called for the abolition of the unitary system that was introduced into the country by the military and a return to a system of government that allows each region to develop at its own pace like in the First Republic.
Also, the Alaafin of Oyo, Oba Lamidi Adeyemi, expressed similar sentiments, saying the “governors are overwhelmed because there was too much concentration of power at the centre.”

“It is a complex and complicated matter. Our children are jobless and many are hungry and angry. The problems are too much for the states. The states are not independent. The structure we run in Nigeria cannot allow state governors to do much for their states, there is the need for power devolution,” he added.

Before going into a closed session, the host of the conference, Sanwo-Olu invited the audience to watch a short pictorial of the material losses recorded during the #EndSARS campaigns, including 500 public and private vehicles, 130 BRT buses, 26 police stations and scores of public and private buildings.

He said what is important to him now is to rebuild Lagos.