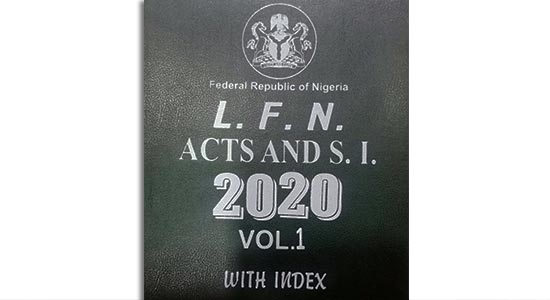 The Nigerian Bar Association through its Section ln Legal Practice has stated expressed its decision to sue the Attorney General of the Federation and Minister of Justice, Abubakar Malami SAN if he refuses to official retract the controversial 2020 amendment to the Rules of Professional Conduct for Legal Practitioners., according to Citylawyermag report.

According to the Chairman of the NBA-SLP, Chief Ferdinand Orbih SAN, despite the AGF’s public denial of involvement in the RPC amendment, the NBA has firmly requested a retraction of the said amendment to be published in the federal gazette.

According to the NBA-SLP, they will be compelled to resort to litigation in the next 7days if the AGF fails, neglects or refuses to accede to their request.

“The Attorney-General of the Federation was on television to disclaim the controversial Rules of Professional Conduct.

“However, we are aware that the RPC has been gazetted under his name. We have therefore informed the Honourable Attorney-General that a viva voce disclaimer of the RPC will not suffice in the circumstances.

“The NBA Legal Committee has decided to engage the AGF and afford him an opportunity to issue a proper disclaimer through a written instrument published in the gazette. We expect this to be done by next week.

“If at the end of the day this is not done, we will have no option than to carry out the mandate of the NBA to litigate the matter. Let me assure that this will not take long any more, as we have been on this matter for almost two years.”

It would be recalled that TheNigerianLawyer sometime last year reported the controversial amendment to the Rules of Professional Conduct for Legal Practitioners purportedly authored by the Attorney General of the Federation and Minister of Justice, Abubakar Malami SAN. The amendment which involved radical changes to the rule raised eyebrows from within the legal community thereby causing swift reaction from the NBA to ensure an out-of-court resolution of the impasse.